With the end of WW2, the conflict that had bound all Americans together, regardless of race, had been resolved and individual citizens were suddenly free to pursue individual interests without guilt. Polarization of the races and class once again overwhelmed the country. The music reflected the state of affairs of the society. Big Band music lost direction and emphasis was placed on the vocalist.

"We've set up a 20-man committee to do away with this vulgar, animalistic, nigger rock and roll bop."
- Alabama White Citizens' Council member

White middle class fears of communism and a new independent -minded black society emerged simultaneously. Since they both threatened the status quo, any cross-cultural performance took on the appearance of being subversive. This totally restricted black music flourished while white music languished of its self imposed limitations. 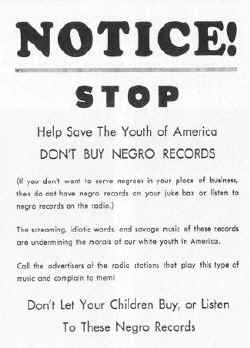 In the hands of black innovators Country blues bands became urban and electric. Gospel music begat doo wop. Big bands splintered into smaller groups. Some into be bop, others into rhythm and blues progressions of the big bands called R&B. All rooted, they cross pollinated and resulted in musical hybrids. 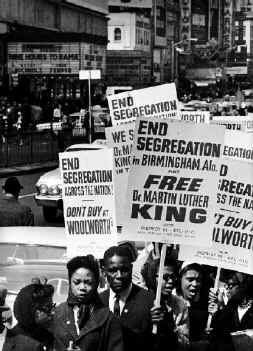 America in the  early 50s was a deeply divided country, on the verge of hysteria about communism and digging more deeply into the national wellspring of racial mistrust and hatred. Rosa Parks hadn't demanded her seat on the bus and it would be few more years before the Supreme Court would rule against segregated schools and three more years before the National Guard would put it into effect in Little Rock. It was easy to see how Negro music was threatening and white teenagers would find it adventurous. It brought them together on the dance floor. 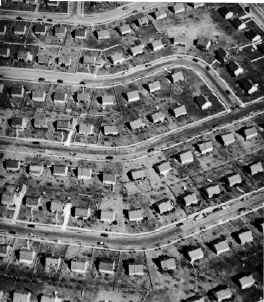 Post World War II was a prosperous and confident America.  Middle class white Americans began flocking to the new suburbs in pursuit of their dreams. There were found nice houses in pleasant neighborhoods where there was no need to lock ones doors. An ideal atmosphere to raise children with neighbors functioning much as an extended family. The TV show "Here Comes the Nelsons " typified the family of the fifties. The songs of the early fifties reflected this and were generally had light melodies, sweet lyrics and wholesome singers. Innocent and inoffensive "feel-good" tunes, which genuinely reflected the mood of post World War II America. Artists like Pat Boone, Rosemary Clooney and Perry Como dominated pop charts. To people that had suffered through The Great Depression and World War II this music didn't seem bad at all. Yet, all that white American complacency could not hold back the vitality of Black R&B music, so a whole new sound emerged - Rock and Roll.

Rock and Roll, characterized by it's pulsating drums, repetitive chord progressions, stepped up tempos, and loud guitars, provided. American teens of the 1950's the perfect excuse to dance crazy new dances, and wear wild new hairstyles.  Thought only a fad, Rock and Roll continued on to become one of the world's most popular and recognizable music forms.