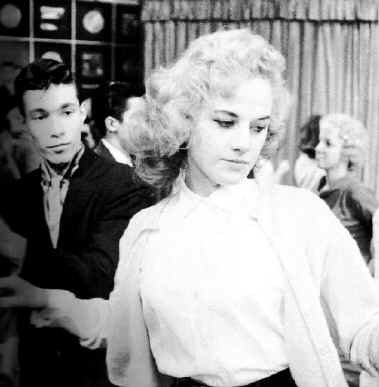 Few things are as much fun for teenagers as dancing. It's a chance to show off and be noticed. For the teens on American Bandstand like Barbara Marcen, it was a chance to be seen by millions The dancers, especially the regulars, were always jostling for a spot in front. "we were brats about it," remembers Arlene Sullivan. We wanted to strut our stuff in front of America," says Bunny Gibson. "But," says Carole Scaldeferri, "Dick didn't want us hogging the camera." "he used the studio mike to get us away from the front. You'd be dancing, and all of a sudden you'd hear Dick's voice telling you to drop back to the rear," says Kenny Rossi. Myrna Horowitz says, "Dick wanted to give everyone a chance. I didn't like dropping back, but I understood it." 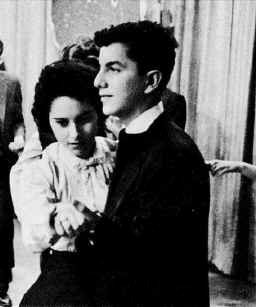 Arlene Sullivan and Kenny Rossi danced together n American Bandstand for a little more than a year. At the height of their popularity, they received as many as 500 letters a day. Arelene, whose mother was a devoted fan, claims she danced on the show "to get my mother's attention." Within three months, Arlene was a regular appearing five days a week. "I was always surprised," she says," that people wanted my autograph. I danced on a TV show; nothing I did was different than kids were doing in their basements. But maybe that's why we were so popular. We were them, and they were us." 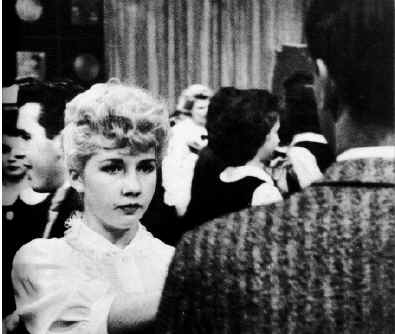 Justine Carelli was American Bandstand's girl next door Always conservatively dressed and neatly coifed Justine was the girl that every mother wanted to see her son marry. She first danced on the show when she was only twelve, two years younger than the rules allowed, thanks to her sister's birth certificate and make-up. Justine was an instant hit; in a few weeks she was a regular. When Justine met Bob Clayton and they started dancing and dating her popularity soared - the two personified the innocent lyrics of the songs they danced to.

Danny and the Juniors 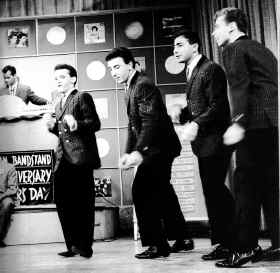 Danny and the Juniors, who appeared on the American Bandstand' anniversary show in 1958, was a group of four teenaged boys whose members went to John Bertram High School with some of the show's regulars. Danny and the Juvenairs sang on the street corners until Artie Singer of Singular Records heard on of their songs "Do the Bop." He took them to Dick Clark, who realizing was on its way out as a dance craze, suggested they change the lyrics. The song got a new title, "At the Hop"(1957), which over night became a number on hit. The group's "Rock and Roll Is Here To Stay" (1958) became a teen anthem later that year 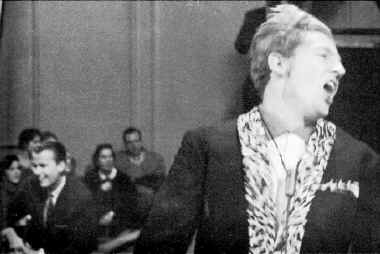 The first Record played on the premiere network installment of American Bandstand was Jerry Lee Lewis' call to action, "Whole Lot of Shakin' Going On". His sharp clothes, animated performances - Lewis was known for kicking the piano stool from under him, playing the piano standing up, banging out chords, rocking from side to side, and wildly tossing his hair - electrified audiences. The success of "Great Balls of Fire" sent the dapper singer's career into the stratosphere. 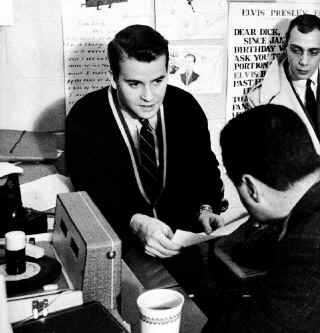 With thirty five records to play, the producers of American Bandstand were constantly searching for new material. Clark met in his office with representatives of the record industry to keep apprised of the latest releases and the newest singers and groups. But in 1959, following the scandalous revelations that Charles Van Doren had been given answers while a contestant on the popular TV quiz show Twenty-One (1956-1958) questions were raised about the honesty of the record industry. Investigators alleged that deejays accepted bribes to play certain songs, otherwise there was no way to explain why many rock and roll songs had become popular. Being the number one deejay in the country, Clark was called to testify at the 1959-1960 Congressional hearings on payola. He swore he never took money or gifts, but he was still forced to give up his interests in the record business 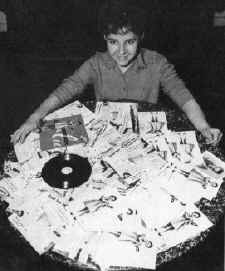 October 27, 1959 was Brenda Lee Day on American Bandstand. The 4' 11" dynamo had been performing since she was a toddler and by the age of six had her own fifteeen minute television show. by twelve, she had several regional country hit songs, including Dynamite 1957, the song that gave he her nickname., Little Miss Dynamite. In 1958, she recorded one of the best rock 'n' roll Christmas songs ever, Rockin' Around the Christmas Tree, which for some reason wasn't release until 1960, when it went to the top of the charts. I'm Sorry, Sweet Nothin's and I Want To Be Wanted were in the Top Ten the next year. in 1962, when she was only eighteen she made Break It To Me Gently, a ballad whose emotional message would have been difficult for a singer twice her age.