Brenda and the Tabulations 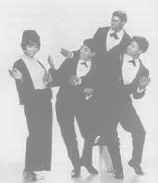 Among the better Philadelphia soul groups of the '60s and '70s, Brenda and the Tabulations made some fine heartache ballads, particularly "Dry Your Eyes" and "Right on the Tip of My Tongue."

Brenda Payton and Maurice Coates worked together at a playground in downtown Philadelphia during the summer of 1966. The popular supervisors decided to sing a few duets together at the end of their season as a treat for the kids. Producer Gilda Woods just happened to be driving by when she heard the two. When she asked if the had any original material the duo lied. and said they would visit her in the next few days. Two days later Gilda came over to Maurice’s house to listen to the hastily written, "Dry Your Eyes."

Woods brought the two would-be singers to Jamie/Guyden Records producer Bob Finiz, and they recorded "Dry Your Eyes" and another Payton-Coates composition for single release. The label on the record read Brenda and the Tabulations, and with the addition of Eddie Jackson and James Rucker, the group was soon out on the road promoting the smash hit.

By late February, 1967, the single had reached number 2 on the R&B charts, while landing nicely in the Pop Top 20. The group quickly returned to the studio to cut a series of follow-ups including, "Who’s Lovin’ You," (R&B 19) "Stay Together Young Lovers," (R&B 44), and another group composition "Just Once In A Lifetime," (R&B 41). Three of their five singles of 1967 also carried "Hey Boy," as the B-side.

All the groups hits were compiled into the highly successful Dry Your Eyes album in late 1967. The album also featured some more original compositions, and funkified versions of the Beach Boys’ "God Only Knows," the Marvelettes’ "Forever," the Supremes’ "Where Did Our Love Go," and Dionne Warwick’s second Top Ten hit "Walk On By." The groups versatility was surprising; especially since personnel changes had already begun. Only Brenda and Maurice were consistently on the groups recordings, some times being backed by male vocalists, or a girl group. Nonetheless, 1967 proved to be a wildly successful year for the entity known as Brenda and the Tabulations.

"You Gave Me A Reason To Live," started off 1968 on a slightly sour note, failing to live up to expectations, but the group reached the upper charts again with "When You’re Gone," written and produced by Finiz.

The rest of the 60s had the group making some haphazard progress, and finally emerging as an all-girl trio, with Brenda, Pat Mercer, and Deborah Martin. A move to the T&B label in the early seventies allowed the girls to work with Van McCoy, and spawned such classics as "A Little Bit of Love," and "Right On The Tip Of My Tongue."

By 1973 the Tabulations had shifted to Epic Records for some successes, only to disband a few years later. During their years on the top Brenda and Maurice toured the world and became a popular live draw on the soul circuit, prompting constant sales of their sole album. The original "Dry Your Eyes" was re-issued in 1997, now including two bonus tracks. The group’s 70s releases are also available on several compilations.