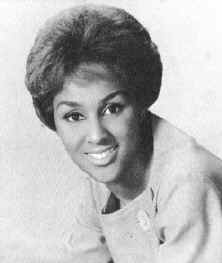 One of Phil Spector's hand picked early '60's girl group singers, Darlene Love sang some lead vocals with the Crystals, Bob B. Soxx and the Blue Jeans, and also had some hits under her own name.

Darlene Wright was born July 26, 1941 in Los Angeles, California. The oldest of five children, her father Joe was a

Pentecostal minister and her mother Ellen was a housewife. In 1941 the Wrights moved to San Antonio after Joe was offered a church there. Ellen almost immediately went to work cleaning houses upon arriving in Texas leaving Darlene the acting head of the family. She was the one who had to make sure everyone got to school and minded the house until Ellen returned in the evening.

sent to live with various relatives. Darlene, with her sister Edna, was sent to live with Joe's sister Dorothy in Port Arthur, Texas.  When she wasn't in school, she was scrubbing stoves, cleaning blinds, and mopping floors. Edna who to young and to sickly finally wrote her parents "You have to come get us. They're treating Darlene like a slave." The Wrights came and got their daughters several months early.

While attending Wheatley Junior High in San Antonio Darlene began joining glee clubs at school and a group called the Wailers that sang at school assemblies.

In 1956 the Wrights moved back to Los Angeles. They bought a house on Flower Street that Ellen still lives in today, for $11,000.

Shortly after her sixteenth birthday the Wrights became members St. Paul Baptist Church where Darlene sang in the choir. It was during a choir practice that her voice caught the attention of Cora Martin the choir director. After singing a song for her, Martin asked her to come down to the Music Mart where they did some broadcasts and sing a few songs. You might say that this was where Darlene's career began.

One day a girl that Darlene knew from church, Delores Ferguson, asked her to sing at her wedding.What she didn't know was that the wedding was also an audition: Delores' bridal party included her friends Gloria Jones, Fanita Barrett, and Annette and Nanette Williams, who had a singing group called the Blossoms. They were looking to replace Annette who had become pregnant.

After the ceremony Darlene was introduced to the girls and was asked to audition for the group at Eddie Beale, their manager's office. Darlene was then asked to sing with the Blossoms. Her parents at first refused to let her, but after meeting the Blossoms they relented.

Wright started singing in 1958 with the Blossoms. The Blossoms recorded as a quartet, without success for Capitol Records from 1958 and 1960, and then a a trio for Challenge and Okeh records. They also did backup singing in Los Angeles, supporting Bobby "Boris" Pickett ("Monster Mash"), James Darren ("Goodbye Cruel World), Bobby Day ("Rockin' Robin") and many others.

Love was brought to Spector's attention by his partner Lester Sill when he was looking for a lead singer for "He's a Rebel." which was to be released under the Crystal's name. When Darlene was asked if she knew about this she said "So What? The man just paid me triple scale."  She figured that it was a cute song, but it was probably going nowhere. 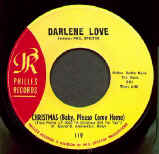 Love went on to record six Philles singles under her own name, including "Wait Til My Bobby Gets Home" (#26, 1963) ,"(Today I Met) The Boy I'm Going To Marry" (#39, 1963), " and "A Fine Fine Boy" (#53, 1963). She also appeared on Spector's Christmas Album. Love continued to sing with the Blossoms through the 60s. They were regulars on Shindig and toured with Elvis Presley in the early 70s. Love sang back-up for Dionne Warwick for ten years beginning in 1971 and later backing Aretha Franklin.

In the Eighties Love branched out into acting appearing in the Lethal Weapon films and appearing in the Tony nominated 1985 the Broadway musical Leader of the Pack based on the songs of Ellie Greenwich. She also recorded two solo albums. Long respected as one of the top vocalists in pop music, Love received long overdue recognition in 1993, when a show based on her career, Portrait of a Singer, opened in January at New York City's Bottom Line Club. Love performed weekly in the long running show.

In 1995 Love won the Rhythm and Blues Foundation's Pioneer Award..