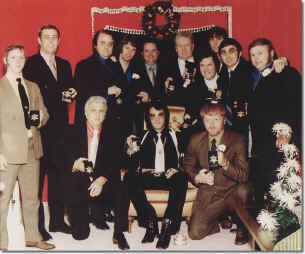 Outwardly, Presley was more popular than ever and one of the biggest personality cults in modern history was taking hold. Off stage Presley was plagued with self doubt, poor management, and a basic dissatisfaction with his life. He repeatedly threatened to quit show business, but debts and financial obligations to his large extended family, employees, and assorted hangers on made that impossible. Presley turned to drugs. After leaving the army he became wary of the public and would often rent whole movie theatres and amusement parks that he would visit at night. By the late Sixties he was an almost total recluse. Although there was evidence that Presley began taking drugs shortly after began performing or while in the army, his abuse of prescription drugs increased during the last years of his life. Through all this he remained highly spiritual and publicly denounced the use of recreational drugs. 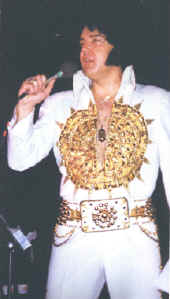 Toward the end of his life he would babble incoherently on stage and rip his pants, having grown quite obese, and at least once collapsed on stage. Despite deteriorating health, Presley maintained a frantic tour schedule, because in 1973 Colonel Parker negotiated a deal with RCA to the rights of many of his masters in exchange for a lump sum payment of which only 2.8 million came to him. After 1973, Parker was earning nearly 50% commission. Worse yet Presley wasn't earning royalties on records recorded before 1973, although they continued to sell millions. Presley opposed tax shelters on principle; naively relied on his father for business advice; gave away expensive gifts and cash. The result was by the mid-Seventies was an impending financial disaster.

June 26, 1977 Presley performed live for the last time in Indianapolis. On August 16, 1977, the day before his next scheduled concert, Presley was discovered by his girlfriend Ginger Alden dead in his bathroom at Graceland. His death was attributed to congestive heart failure. A later autopsy revealed advanced hardening of the arteries and an enlarged liver. Later it was determined that drug abuse may have been a contributing factor. In September 1979 Presley's private doctor Dr. George Nichopoulos was charged by the Tennessee Board of Medical Examiners with indiscriminately prescribing 5,300 pills and vials for Presley in the seven months before his death. He was later acquitted.

Thousands gathered at Graceland where his body lay in state before he was buried in a mausoleum at Forest Hills Cemetery in Memphis. After attempts to break into the mausoleum, Presley's body and that of his mother were moved to the Meditation Garden behind Graceland. Nearly two years later, Vernon died and was also buried there. The estate now passed on to Lisa Marie.

Court battles over the estate ended in June 1983 after twenty one months of litigation with a settlement of four lawsuits. Colonel Parker was forced to turn over most of his interests in Presley's audio and visual recordings to RCA and the Presley family in return for a large monetary settlement. Priscillia Presley assumed control of the estate and through a number of business moves made Presley's estate more valuable than it had ever been. The cornerstone of the Elvis Presley Enterprise, Inc. financial empire is the Tennessee state law Priscillia Presley pushed for that guarantees to his heirs of commercial rights to the deceased celebrity's image and likeness. As a result Elvis Presley is a trademark and anyone selling Presley related memorabilia in the U.S. must pay EPE an advance fee plus a royalty on every item sold.

Claiming the funds were needed to maintain the property, Priscillia opened Graceland to the public in 1982. Though not maintained exactly as Elvis left it and the second floor, where the bedroom was remains off limits to the public, millions from all over the world have visited Graceland. Approximately 675,000 people visit Graceland yearly. The Presley estate in now estimated at well over a $100 million.

Presley was inducted into the Rock and Roll Hall of Fame in 1986. 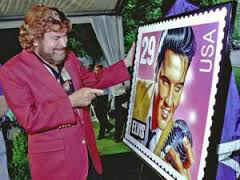