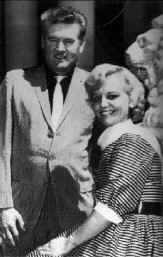 In July Vernon, Presley's father remarried. Vernon Presley's second wife was Davada "Dee" Stanley. At this time Presley began gathering more closely around him his friends, employees, and hangers on that would become known as the Memphis Mafia and would accompany him almost constantly until his death. Presley's world would become increasingly insular.

G.I. Blues was released in in 1960 and "It's Now Over Never" reached #1. Presley had five number #1 hits in the early 60s, "Stuck On You," "It's Now or Never, "Are You Lonesome Tonight," (1960), "Surrender (1961); and "Good Luck Charm" (1962). Priscilla Beaulieu, a teenage daughter of an Army officer that Presley had met while in Germany, visited Graceland during Christmas 1960. In early 1961 she moved in, it was said, under the supervision of Vernon and Davada. The press went along with the spin Colonel Parker put on the story, and few seemed to care the King of Rock and Roll was sharing his house with a teenaged girlfriend.

After a live performance on March 25, 1961 Presley quit performing and spent the next eight years making movies. The soundtracks from his movies were generally poor. By the mid-Sixties Presley was earning $1 million per movie plus a large percentage of the gross. Each movie had a concurrently released soundtrack album, five of which went gold. Presley was displease with these films, but Colonel Parker insisted that Presley stick with this winning formula. Years later Parker's shortsightedness would result in his turning down Barbara Streisand's offer to have Presley co-star with her the 1974 remake of A Star Is Born. Parker felt Streisand didn't deserve equal billing with Presley.

With the British invasion, teenagers were hearing more of his disciples than Presley himself. Presley, unlike most American rockers wasn't swept away, but the Top Ten

was increasingly beyond his reach. Presley turned increasing inward, focusing on the family. On May 1, 1967 Presley married Priscilla in Las Vegas; on February 1, 1968 their only child Lisa Marie was born. Fearing he had been forgotten, Presley defied Parker and made a comeback television special. Over the summer he taped the television special that was released on December 3, 1968 to high ratings. It's soundtrack reached #8 and produced his first Top Twenty single "If I Can Dream" (#12, 1968) since 1965.  With this success

Presley turned to performing in Las Vegas.  On July 26, 1969 Presley began a month long appearance at the International Hotel. This set the course for all of his future performances. His fee for four months was over a $1 million. Riding the crest of the comeback Presley released a series of top singles, including "In the Ghetto," "Suspicious Minds," "Don't Cry Daddy," and The Wonder of You". Presley began touring again, his shows selling out and frequently breaking box office records. Two on tour documentaries were released Elvis: That's the Way It Is (1970) and Elvis On Tour (1972), the latter which won the Golden Globe Award for Best Documentary.

Elvis Presley's career took a turn when he headed for the glitter and lights of Las Vegas. In 1969, he started at the International, which at the time was the largest hotel in the world and would later become the legendary Hilton Hotel. He was paid $100,000 a week for two shows a night, a month at a time, twice a year, and his contract was for seven years. The hotel casino gave Elvis $10,000 in free gambling chips every day - but he never actually played, as he said it went against the teaching of his Southern Baptist upbringing. Elvis being in Las Vegas created a huge boom of business for Sin City, and tens of thousands of people went there to see him, and while they were there, spent a lot of money at the casinos playing slots or other Vegas-style casino games. Most see Elvis' Vegas years as his downfall, but for many years he drew some of his largest crowds there.

Presley was honored with countless Elvis Presley days around the country, and the U.S, Jaycees named him one of the ten most outstanding young men of America  in 1970. His birthplace in Tupelo, Mississippi was opened to the public and a portion of Highway 61 South that ran in front of Graceland was renamed Elvis Presley Boulevard. That October Presley had his last Top ten hit "Burning Love" (#2).

Meanwhile Presley's personal life had become the subject of countless tabloids.In February 1972, Presley  separated from Priscilla and on his birthday in 1973 filed for

divorce. Less than a week later the TV special Elvis: Aloha from Hawaii was broadcast over satellite to over a billion people in forty countries, an indication of his international appeal although (with the exception of three dates in Canada in 1957 and an impromptu performance in Paris while on leave in 1959) Presley never performed outside the United States. During his career Presley had 94 gold singles, three gold EPs, and over 40 gold albums. His movies grossed over $180 million and millions more were made by the merchandising of Elvis products, the rights which were controlled by Colonel Parker