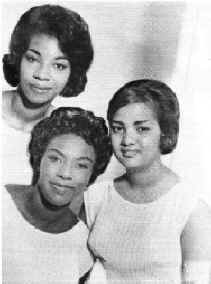 The Jaynetts, from The Bronx, NY, recorded one of the more discussed recordings of all time, the mystical-sounding "Sally Go Round the Roses," which shot to number two on the pop charts in 1963.

The Jaynetts were a female R&B group from the Bronx. Formed by producer/composer J & S Records label owner Zelma "Zell" Sanders, the Jaynetts were really more a studio concoction than a group. In fact, the three women in the usual Jaynetts publicity photo may not even be the Jaynetts that recorded the song. There were at least five female vocalists on the date the song was recorded-- Johnnie Louise Richardson, Ethel Davis, Mary SueWells, Yvonne Bushnell, and Ada Ray.

Zell had recorded for Hearts as a group and was looking to form a second group to absorb some of the Hearts' overflow members. Thus, the hearts came to be. After that the Jaynetts name went unused for five years,

In 1963 Chess Records had connections with J&S, sent Abner Spector to oversee production. Spector spent about a week creating "Sally Go Round the Roses"

Sally, Go 'Round The Roses was a number two song for the Jaynetts in 1963. Zell had this odd little number, "Sally, Go 'Round the Roses," when Tuff Record's  producer-label executive Abner Spector came to town looking for some material; and a girl group. The meeting of Spector, the Jaynetts, and the mystifying lyrical ambiguity of Zell's "Sally" would culminate in the creation of a rock and roll classic

Follow up singles on Tuff, "keep An Eye On Her," "Snowman, Snowman," and Swet Potato Pie" falied to chart and Chess and Specor lost interest. Zell moved her J&S Records to upstate New York in 1965 and releases five more singles by the Jaynetts featuring her daughter Johnnie Richardson.

Johnnie Richardson recalled to one rock historian, "What happened was that Abner Spector was an electronics nut. He took the girls in the studio on a Friday, and they didn't get out of there until everybody was on the track. Anybody that came in the studio that week, he would put them on. Originally, I think he had about 20 voices on 'Sally.'" The cost of the project alone, Richardson figured was over $60,000 - an unheard of amount of money to spend on recording a pop single in 1961.

Zelma "Zell" Sanders was the mother of Johnnie Louise Richardson who was a touring member of the Jaynetts after she had been part of the singing duo of Johnnie & Joe. Johnnie suffered a stroke and died on 10-25-88.

Sally, Go 'Round The Roses was reprised by Grace Slick & the Great Society just prior to her joining the Jefferson Airplane.

Sally Go Round the Roses

What about the songs cryptic interpretation?

"Sally, Go Round the Roses" is a timeless wonder of a song featuring an odd hypnotic rhythm and soft voices seductively rising and falling. The lyrics seem to potray Sally in an alluring bed of roses, catching an eyeful of her lover with another.

Another interpretation of this song is Sally a "closeted" lesbian who sees her "baby" also female with "another girl" which is the "saddest thing in the whole wide world" except perhaps being a lesbian in 1963. The roses "won't tell her secret" Of course her "secret" is her homosexuality and she has no one to confess it to, but the roses where she "can sit and cry, not a soul will know."

"Sally Go Round the Roses" very poignantly describes the way lesbians must have felt back in the early 60's when must of them felt that they had to hide their sexual orientation.

Another interoperation is the following. "Baby" to refer to a guy was typical of lots of girl-group recordings (e.g. "Be My Baby"). Sally had just lost her virginity to the guy and now he's with another girl.

Others think the song is about a religious experience, or possibly a mental breakdown.

It has been said "Sally, Go Round the Roses" was derived from English folk music. Others say it it was Black jump rope or jacks playing rhyme.

Information on this page taken from a discussion from rec.music.rock-pop-r+b.1960s