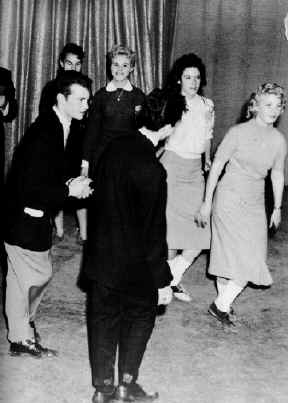 After the American Bandstand teens created the popular dance called the Bunny Hop, the kids began churning out new dances for every new beat. Following the Bunny Hop was the Stroll, a slow, simple dance, where two lines - boys on one side, girls on the other - faced each other,. They dragged one foot behind the other, shifting from left to right, then back again. The fun came when the couple met in the  middle to strut down the aisle, all eyes on them. The dance was inspired by Chuck Willis' hit "C.C. Rider." It became so popular that Willis was dubbed "King of the Stroll." But the dance soon got a song of its own when Dick Clark suggested to the Diamonds that they create a song specifically for the dance. The Diamonds hot with their hit "Lil Darlin'" (1957), struck gold again with "The Stroll".