An unsuccessful audition of the Matadors for Wilson's manager Nat Tarnopol would change Gordy's life. Berry really liked them and told them so after the audition. This would be the beginning of a close friendship between Gordy and the Matador's lead singer Smokey Robinson. The Matador;s soon changed their name to the Miracles. Gordy managed the Miracles and produced their 1958 single Got A Job on the End Record label. The small royalty check  ($3.19) he received from End and other similar for all hits he had co-written convinced him to start his own label Tamla. Originally he had wanted to call it Tammy after the Debbie Reynolds ballad, but the name had already been taken.

With the $800 loan from  the family  Ber-Berry Co-Op , Gordy started Talma  Records. In 1959 he made a $300 down payment toward a total price of $23000 For a house at 2648 West Grand Boulevard.. Living upstairs with his second wife Raymona he converted the downstairs into and office suite and the basement a recording studio. He also started a second label Motown Records. Motown Records Inc. Porch Hitsville USA 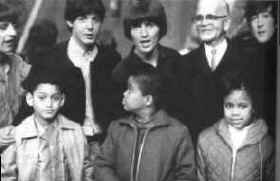 In 1959 Gordy started his own publishing company Jobete Publishing named after his three children Hazel Joy, Berry and Terry. If you wrote for Motown you were published by Jobete which grew to be one of the most powerful in the industry. 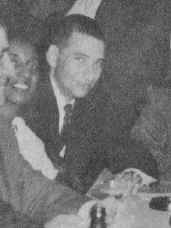 In 1959, Barney Ales who worked as sales manager for a local record distributor Aurora Distributing, met Gordy through local  white deejay Tom Clay. Ales would  arguably become Motown's most important White executive. Entering the record business in 1955 as a representative for Capitol Records, he moved the next year to Warner Brothers Records before becoming a partner in a local distributor ship. In all these jobs Ales acted as a laison between record labels, radio stations and distrubutors in the Midwest.

Ales was an aggressive distributor the type that was key to small record companies. Ales sold to the local distributors who in turn arranged airplay and sold to retail. Below them were the one-stops (minidistributors) who sold to the small retailers that wanted only a few copies of a record. 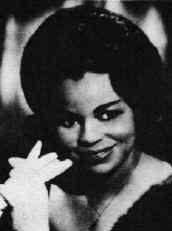 Gordy had been using B&H, a local Detroit distributor. B&H's specialty was R&B while Ales handled everything. Realizing Ales had the best connections with the one-stops and could get his records promoted on white stations, Gordy soon persuaded him to join the company. In 1959, Ales became an unpaid advisor to Gordy and sister Loucye in billing. Ales, in addition the sales and promotion was assigned to collecting the receivables.

In 1960, Ales was hired as vice president of sales and ditribution. All most of all Motown's distributors and their promotion staff were white as were the executives. This would become an issue by the end of the 60s as black power movement grew.

"First of all I made the money, it's my money. I do what I want with it. Black people have shown a lack of understanding of what I'm doing as a general market business man Why do I hire this white man, or why this or why that. Because the white man can do it better than I can do it."
Berry Gordy

While the Gordys were Motown's first inner circle, Gordy brought in a group of Detroit music veterans to form the next layer of management.

By 1962, Ales had hired Irv Biegel and Phil Jones. Biegal was assigned him to singles sales and promotion with Jones doing the same with albums. In 1963 Al Klein was recruited to hand singles and sales in the South. In October 1969, Miller London was hired as Motown's first Black salesman. Ales continued to hire blacks into the sales including Ralph Thompson in 1970, first in regional in regional sales, he later would became Ales assistant. Joining as a stock clerk in 1971, Alvin Jones moved to regional sales the next year and ended up Motown's last president before it was sold in 1988. 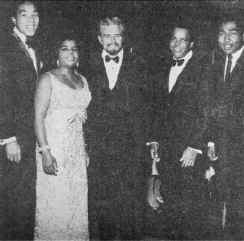 While the Gordys were Motowns first inner circle, Gordy brought in a group of Detroit white music industry veterans to form the next layer of management. These were lawyer Ralph Seltzer, a friend of Ales as Vice President of Corporate Affairs and special assistant to Gordy; Harry Balk - Executive Director of Detroit office; and Michael Roskind vice president and CEO. 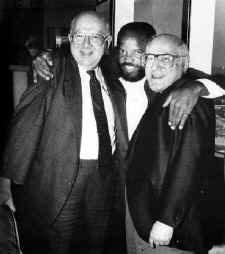 Sidney Novick, an accountant, superseded George Edwards. He was the chief supervisor of Motown and Jobetes books. His brother Harold. a tax attorney, was an important consultant that ran Motown's New York office. Another lawyer Ed Pollack filled a number of administrative positions. 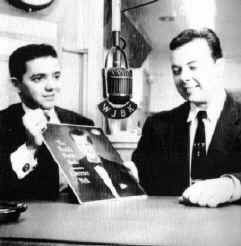 Gordon Prince on the left was part of promotion and went on to became national sales manager.

Michael Luska was with Motown from 1969-1982. He started a regional salesmanger. In 1971 was promoted to national sales manager and finally became executive vice-president of sales and marketing in 1979.

Billy Jean Brown, an attorney, initially was hired as the company librarian, but six months later was elevated  to head of quality control. 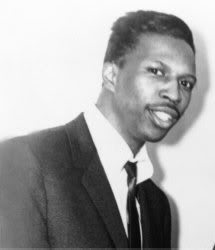 William Mickey Stevenson as A&R man. His responsibilities were to supervise musicians, producers and writers. he assigned producers to acts, made sure songs were written on time and produced when deadlines had to be met and he didn't have anyone to take the assigment. In the early days his most imprtant job was to build Motown's session players. Working under Stevenson was Clarence Paul.

In November 1980 Jay Lasker was brought in to be Motown's president. He would be fired in 1987.

In 1996 Shelly Berger was hired by Ralph Selzer to manage ITM. His job was to find music, television, and film tie-ins for Motown artist. He was the Supremes tour manager.

Gordy initially recorded R&B artists on Tamla Records. He signed Mabel John, the gospel trained sister of blues singer Little Willie John. Gordy scored a minor hit with Tamla's first release, R&B singer Marv Johnson's "Come To Me." As the record picked up steam Gordy found he could not keep up with the demands of national production and distribution and leased the master to United Artists. Later in the first year of operation he co-wrote and produced "Money," which was recorded by Barrett Strong. Not yet equipped to break a national hit "Money" was released  by Anna Records which was owned by his sister Gwen and her husband Harvey Fuqua. "Money" eventually reached the number two spot on the R&B Chart. In November 1959, Gordy recorded "Bad Girl" by a young William "Smokey" Robinson and the Miracles that reached number ninety-three on the pop charts with the help of national distribution by Chess Records.

Smokey Robinson convinced Gordy that Motown should distribute its own records. In 1960, Gordy co-wrote and distributed "Shop Around" by Smokey Robinson and the Miracles, which was a number one hit and established Motown as an important independent company. By this time Gordy had set up the Motown Record Corporation, Hitsville USA and Berry Gordy Enterprises. Jobete Music was his publishing firm and management agency International Talent Management, Inc. He also set up various subsidiary labels.

Early Motown logo from the back of the first album jacket

Through the next four years, Gordy continued to produce hits by capitalizing on the girl group craze. In 1959, a sixteen year old girl, Mary Wells, approached Gordy with a song she had written for Jackie Wilson. Unable to write music, Wells sang the song to Gordy, who immediately signed her and released her version of "Bye, Bye, Baby," which made the Top Ten on the R&B charts in 1960. Two years later she teamed with Smokey Robinson, who now wrote and produced for Tamla label and hit with "The One Who Really Loves You," "You Beat Me To Punch," and "Two Lovers." The next year she recorded "Laughing Boy" and "Your Old Stand By." In 1964 Wells topped the charts with "My Guy."

Gordy also charted with the Marvelettes. Around 1961, one of their teachers arranged an audition with Gordy, after which he signed them and released "Please Mister Postman," which became Motown's first number one record. The next year the Marvelettes hit the charts with "Playboy," "Beachwood 4-5679," "Someday Someway," and "Strange I Know." In 1962 The group toured the South as part of the first Motortown Revue.

Encouraged by his success with the Marvelettes, Gordy recorded another Detroit girl group, Martha and the Vandellas. Martha Reeves, influenced by Clara Ward and Billie Holiday, joined with Annette Sterling, Rosalind Ashford and Gloria Williamson sang as the Del-Phis while in high school and record the unsuccessful "I'll Let You Know" for Chess. In 1961 Reeves was hired as a secretary at Motown and by 1962 had convinced Gordy to record her group. The group sang backup vocals on a number of Motown hits including "Hitch Hike" and "Stubborn Kind of Fellow" by Marvin Gaye. Martha and the Vandellas hit the charts with "Come Get These Memories," followed by the million selling "Heat Wave" and "Quicksand." The next year they recorded "Dancing In the Streets" which reached near the top of the charts.  Martha and the Vandellas, along with Mary Wells and the Marvelettes, identified Motown as a major source of the girl group sound.

Gordy the son of a black entrepreneur who hoped for the upward mobility of blacks, specifically groomed and cultivated streetwise teens from the streets of Detroit to make them acceptable to Mainstream America. In 1964 he hired Maxine Powell, who had operated a finishing and modeling school, to prep his performers. Powell tried to transform Motown artists into polished professionals. 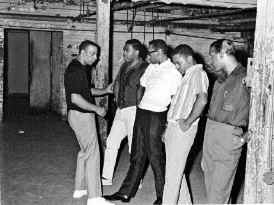 A few months after adding Maxine Powell, Gordy hired choreographer Cholly Atkins, a well known dancer in the 1930s and 1940s who had performed at the Cotton Club and Savoy Ballroom, to teach these groups how to move gracefully

Atkins worked with Maurice King, who served as executive musical director. King who had arranged shows at Detroit's Flame Show Bar for years and had worked with jazz artists such as Billie Holiday and Dinah Washington, taught the Motown groups about stage patter. 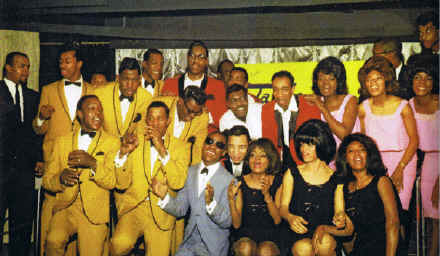 At EMI in London, March 1965
Berry Gordy,Temptation, Miracle, Stevie Wonder, Martha and and the Vandellas, Supremes

By the mid-1960s, Gordy had assembled a Motown team that could take poor black youths from Detroit and teach them to talk, walk, dress as successful debutantes and debonair gentleman

Gordy combined the polished images of the Motown acts with a gospel-based music that could appeal to mainstream America. Blues and R&B always had a funky look to it back in those days, and Motown wanted to have a look that fathers and mothers would want their children to follow. They wanted to kill the imagery of liquor and drugs and how some people thought it pertained to R&B. Therefore when they reject anything that had a strong blues sound to it when choosing material for their artist.

In place of the blues and R&B, Gordy favored a distinct music grounded by an insistent pounding rhythm section, punctuated by horns and tambourines and featuring shrill, echo-laden vocals that bounced back and forth in a call and response of gospel. Building upon his experience with the girl group sound, he produced a full sound reminiscent and expanding on Phil Specter's Wall of Sound.