Paul Revere and the Raiders

Paul Revere and the Raiders emerged  from the rock and roll scene of the Northwest to become a national pop success, trading on the enormous teenybopper appeal of ponytailed lead singer Mark Lindsay

Paul Revere was born January 7, 1938 in Harvard, Nebraska, and grew up in Boise, Idaho. As with any unusual name, it subjected the young Revere to some schoolyard ribbing, such that even after he started in the entertainment business, he never thought of using it professionally.

Early on Revere did think of entertainment. When he was small he would go to the movies and see the Hoosier Hotshots and Spike Jones and the City Slickers. It was then that he first thought of mixing music and comedy together.

The music that Revere listened to as he grew up was boogie-woogie, and like many people of his age, the success of the early rockers of the mid-'50s was the inspiration to play the music himself. To the piano-playing Revere the main catalyst was Jerry Lee Lewis, whose "A Whole Lotta' Shakin' Going On" became a smash hit when he was 19.

Revere after high school went barber college, opened his own barber shop, and eventually opened a drive-in restaurant, the Reed 'n' Bell, in Caldwell, Idaho. Possessing considerable business insight, Revere approached rock and roll with a far more professional attitude than his peers, and soon after joining a local band, began to transform them into a polish act.

At that time Mark Lindsay, a 16 year old who had already sung in a high school band, was working in a bakery across from Revere's restaurant. Revere's band had caught Lindsay's ear and it was while they were playing at a local dance at the Elks Hall and walked on stage and asked to sing a song with them.

The next day Revere walked into the bakery to pick-up a delivery and told the bespectacled bun boy with flour on his face and baker's hat on his head, about the crazy, skinny kid who  had gotten up onstage the night before.  "How was he?" Lindsay asked.  Revere replied "He wasn't bad." Lindsay whipped of his hat and glasses and said "It was me!" Lindsay

Soon Lindsay had replaced the band's lead singer and, picking up the tenor saxophone, became a full paid member of the group, which eventually became called Downbeats, a name taken from the jazz magazine. At the end of the '50s, the Downbeats were playing sock hops and after game dances at high school, but aspired to more. That is what led Revere and Lindsay to a small recording studio in the area, where they cut a half dozen tracks.

Revere took the tapes to Los Angeles and began knocking on doors without much success until he stopped at the Gardenia pressing plant of John Guss. Not only did Guss agree to cut a record from Revere's tape, but when he found out Revere's name suggested a name change to Paul Revere and the Nightriders. Revere rejected the name, but later settled on Paul Revere and the Raiders, which was the name that appeared on the groups first single, a boogie woogie version of Chopsticks called "Beatnik Sticks."

Revere then went around to radio stations in Idaho plugging the song as well as it's follow-up, "Paul Revere's Ride," but it was the group's third single "Like Long Hair," an instrumental which crossed the serious classical style of Rachmaninoff with Jerry Lee Lewis, that caught on nationally. 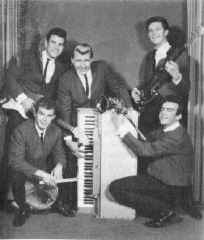 "Like Long Hair" entered the charts in March 1961, eventually reaching the Top 40 and even got on American Bandstand. Revere was unable to follow up the records success since, by the time the it peaked in the charts, he had been drafted. In fact, a two week national tour without him, as Lindsay fronted a band called "Paul Revere's Raiders that included a young Leon Russell subbing for him on the piano.

Revere's was assigned Conscientious Objector status due to his family's Mennonite religion, and he chose to serve his alternative service as a cook at a mental institution in Wilsonville, Oregon. Lindsay moved to California, but returned in 1962 to join Revere in a new version of the band.

The two joined with Roger Hart, a disc Jockey from KISN in Portland, to promote shows at local teen dances and armories, and he became their manager.

A variety of bassists and guitarists passed through the Raiders during 1962 and 1963, while Portland  born drummer Mike Smith turned out to be a long term group member.

The band began honing its style at local dances, adding hard driving R&B from the black charts to their repertoire and developed a manic showmanship that would become their

onstage trademark. The front line Lindsay, the bassist, and the guitarist would perform choreographed steps, while Revere performed his own crazy antics in back and often climaxed the show by setting his $50 upright piano on fire.

With such tactics, and Hart's promotional help, the Raiders became a big regional act, rivaling the success of the Seattle based Wailers. One of the Raider's most popular songs was "Louie, Louie." The Raiders continued to record at Gardena, but despite their early success with "Like Long Hair" making records wasn't Revere's primary goal. The Raiders were to be a working rock and roll touring band.

Roger Hart suggested that the group record "Louie, Louie."   The master recording cost $40 to cut at Northwest Recorders in Portland, where it was made at roughly the same time that the Kingsmen, another local group, recorded the same song at the same studio. The Raiders version came out first April 25, 1963), but the Kingsmen's' (early May 1963) went on to become a monstrous hit.

However, Ken Bolster the local Columbia Records rep, requested a copy of the Raiders and within a few weeks they received a phone call from David Kapralick of CBS and signed with Columbia. 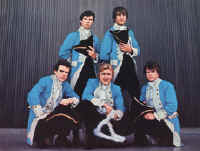 It was at this time that Revere and Lindsay discovered the Raiders' look in a dusty old costume shop in Portland Oregon. While walking down Southeast Broadway in Portland, they passed a costume shop and discovered some George Washington type uniforms.. Laughing  and saying "that's the way the old guys used to dress," they rented the costumes.