Born in 1930, Ray Charles (nee Ray Charles Robinson) in Albany, Georgia grew up in Greenville, Florida.  At age six he started to lose his sight from glaucoma after traumatically watching watching his brother drown in the wash tub his mother used for take-in laundry. At the age of seven, from 1937 to 1945 he attended the St. Augustine School for the Deaf and Blind, where he learned piano, and later clarinet and alto saxophone, compose for big bands, as well as learning to read and write music in Braille. Orphaned at fifteen, Charles struck out on his own performing in bands around Florida. In 1948 at the age of seventeen Charles took his $600 savings and moved to Seattle. There he formed the Maxim trio, a group grounded in the style of Nat "King" Cole and Charles Brown. The Maxim Trio had a major R&B hit in 1949 with "Confession Blues" on the Downbeat (later Swing Time) label. It was during this time that he first began using Heroin. Charles toured with blues artist Lowell Fulson in the early '50s, having R&B hits with "Baby Let Me Hold Your Hand" and "Kiss Me Baby" on the small Los Angeles based Swingtime  Label.

In 1952 Atlantic Records purchased Charles's recording contract from Swingtime for $2500.   Charles give up the Nat "King" Cole stylization and began adapting gospel music techniques to blues lyrics. He soon had a hit with "It Should Have Been Me."  In 1954 he arranged and played piano on Guitar Slim's top R&B hit "The Things I Used to Do" for Specialty Records and formed his own band. In 1955 Charles had a hit in both the R&B and pop fields with his own composition "I've Got a Woman." Using top flight studio musicians Charles had hits consistently on the R&B charts through the late '50s with "A Fool for You," "Drown In My Own Tears," :Hallelujah I Love Her So," and "Lonely Avenue," The recording debut of his female backup group the Raelettes. He also became popular with jazz fans, recording two highly acclaimed records and performing a set at the 1958 Newport Jazz festival in 1959. Charles established himself as a popular recording artist and a pioneer of soul music with the release of his own top R&B/pop hit composition "What I Say." 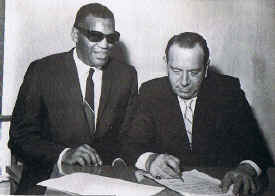 Sensing that Atlantic was still basically an R&B organization, Charles moved to ABC-Paramount Records in late 1959. Through 1961, he had top pop hits with "Georgia On My Mind," "Hit the Road Jack," "Ruby," and "Unchain My Heart."He also recorded Genius + Soul = Jazz for Impulse (ABC's jazz subsidiary label), yielding a near smash pop/ top R&B hit with the instrumental "One Mint Julep," This album and one recorded with Betty Carter for ABC-Paramount brought him increasing popularity with jazz fans, black and white.

In 1962 Charles formed Ray Charles Enterprises, comprised of Tangerine Records, Tangerine Music, and Racer Music Company, opening studios and offices in Los Angeles in 1963. By then he was using forty piece orchestras and full vocal choruses for his recordings. With his full commercial sound, his Modern Sounds in Country and Western became phenomenally popular producing crossover smashes with "I Can't Stop Loving You," "Born to Lose," and "You Don't Know Me." Within a year volume two was released and had crossover hits "You Are My Sunshine," "Your Cheating Heart," and "Take These Chains From My Heart." On ABC Charles had major pop hits with "Busted," "That Lucky Old Sun," "Crying Time," and "Together Again."

During the 60s Charles became involved in films, appearing in the 1962 film Swinging Along, and the 1966 British film Ballad in Blue, and recording the soundtracks for The Cincinnati Kid (1965) and In the Heat of the Night (1967). By this time he was performing on the nightclub circuit, touring with his own package revue from 1969 into the '70s.

In 1973 Charles left ABC Records, retaining the rights to his ABC material and transferring his Tangerine operation to the new label Crossover. During 1976 he recorded Porgy and Bess with Cleo Laine for RCA Records. In 1977 he returned to Atlantic, moving to Columbia in the '80s and Warner Brothers in the '90s. In 1978 Dial Press published his autobiography and in 1980 appeared in The Blues Brothers movie and scored a minor country hit for his duet with Clint Eastwood, "Beers to You, from the film Any Which Way You Can. Charles had a major country hit with "Born To Love Me" in 1982 and later recorded duets with country stars on Friendship. The album yielded five country hits, including "We Didn't See a Thing" (with George Jones), "Seven Spanish Angels"( with Willie Nelson) and "Two Cats Like Us" (with Hank Williams JR,). Charles also played a major role in the recording of USA for Africa's "We Are the World" single in 1985.

1n 1989 Charles had his first major pop hit in over twenty years with with "I'll Be Good to You," featuring himself and Chaka Khan. In the '90s Charles appeared in commercials for Pepsi and was the subject of a PBS documentary.

Ray Charles continues to work about eight months a year, touring with a large orchestra. He lives in Los Angeles where he is involved with RPM International, a corporation that includes Crossover Records, the music publishing companies Tangerine and Racer Music, and RPM Studios, where he records. In 1990 Charles began recording for Warner Brothers, recording in 1993 My World with Eric Clapton, Billy Preston, Mavis Staples, and June Porter.