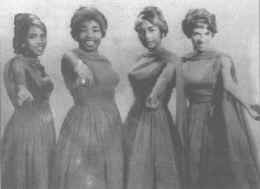 The Starlets were formed in Chicago, Illinois in early1961. The group consisted of Jane Hall, Maxine Edwards (both worked in a pecan processing plant, Mickey McKinney, and Jeanette Miles, all 18 and 19 years old. After rehearsing together, Hall took them to Bernice Williams, a local songwriter, who had been writing for Dukays.   Williams feeling the group was missing something added Liz Walker (sometimes known as Dynetta Boone). Williams then wrote a song called "Better Tell Him No," and with Edwards on the lead recorded it for Pam Records (owned by Bill Shepard and Carl Davis) a local label located on Chicago's South Side.

The Starlets then began touring with the likes of Jackie Wilson, The Spinners, Gladys Knight and the Pips, and Mary Wells.

In August Pam issued there second record "My Last Cry," but it went nowhere.

The next April, the Starlets went to Philadelphia for an appearance. It was during this time that they met a fast talking salesman named Harold Robinson, who convinced them to come to his studio and record a couple sides. The studio was right on the car lot and Robinson used local producer Phil Terry to record the oldie "I Sold My Heart to the Junkman."in an exciting up-tempo version with Edwards on lead. Several weeks later "Junkman" was all over the radio, but the label read The Blue Belles. The record song reached number 15 in 1962 and to number 13 R&B. The Starlets and Phil Terry the sued Robinson who claimed that he used the Blue Belles in the background, erasing the Starlets vocals, though it did come out that Edwards was the lead voice. Terry disagreed, saying all the voices were the Starlets. Apparently the Starlets won as each girl received $5000.

Carl Davis moved to Okeh Records in the A&R department and did one single (You Belong to Me") with the girls that read Dynetta and the Starlets with Liz Walker on the lead. Released in 1962 it quickly disappeared. The group was soon dropped, but seemingly as a punishment for "Junkman" situation, they were told that they couldn't record anywhere else as a group. The bluff worked and the Starlets broke up.

The Starlets were an American girl group from Chicago, Illinois. The group came together in 1961, and auditioned for a Chicago songwriter, Bernice Williams. Williams wrote them the tune "Better Tell Him No", which was released on Pam Records that year. The record peaked at #38 on the Billboard Hot 100.

The group then toured with Jackie Wilson, Mary Wells, and Gladys Knight & the Pips.The group's follow-up single, "My Last Cry", was less successful. In December of that year, the group performed in Philadelphia, and while there, Newtown Records owner Harold Robinson had them record the song "I Sold My Soul to the Junkman".

Newtown released the single under the name "The BlueBelles" in order to avoid contractual issues with Pam Records; as the song became a hit, Robinson assembled a local Philadelphia ensemble to lip-synch the song on television. Among this second group's members was Patti LaBelle. As "Junkman" itself became an even bigger hit than "Better Tell Him No", The Starlets sued Robinson, settling for $5,000 per member The Starlets then moved to Okeh Records, releasing one single, 1962's "You Belong to Me", and broke up shortly thereafter.