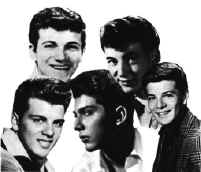 To many avid rock historians, the teen idols -- who were firmly entrenched on the top of the charts between the death of Buddy Holly and the rise of the Beatles -- represent the greatest threat to rock's survival that the music ever weathered. Wimpy, overwhelmingly bland and safe, their connection to rock & roll was often tenuous, and their commercial ascendancy has even been discussed as a conspiracy by the music business and sundry other moral authorities to rob rock & roll of its vitality.

In retrospect, that seems fairly unlikely, though there's no doubt that the more conservative elements of the entertainment industry and the status quo as a whole felt more comfortable with these performers. Owing as much or more to traditional Tin Pan Alley and middle-of-the-road values than pure rock & roll, their massive success nonetheless didn't come close to stamping out the forces that gave birth to the explosive soul, surf, and British Invasion sounds that reclaimed the airwaves after only a few years.

"Teen idols" were by no means a phenomenon that began with the rock & roll era; bobbysoxers had been pining to the sound of mainstream pop crooners for a good decade or more before Elvis hit the scene. As far as rock was concerned, the original teen idol was Pat Boone, whose first hits were bowdlerized versions of classic rockers by Little Richard and Fats Domino.

The first two teen idols to achieve mass success after Boone could hardly have possibly defined the polar extremes of the genre better. There was Paul Anka, whose early hits were mainstream ballads with mild rock & roll trimmings, and who exemplified the style at its most operatic and melodramatic. Then there was Ricky Nelson, whose success was virtually guaranteed by his popular weekly TV series, and whose rockabilly records were better than they had any right to be.

The Philadelphia teen idols of the late '50s -- Bobby Rydell, Frankie Avalon, and Fabian -- patterned themselves after Anka much more than Nelson. Recorded on the local Cameo-Parkway, Chancellor, and Swan labels, they were launched into national success with regular appearances on American Bandstand, hosted by Dick Clark, who sometimes held financial interests in the record companies of the singers he pushed in this manner. Rydell, at least, could sing; few would contest that Avalon and Fabian were promoted more on their appearance than their limited vocal abilities, and both would move into movies and television work as their chief focus after their initial musical success.

It worked the other way around as well, of course; established teenage television stars with meager vocal abilities were hustled into recording studios to capitalize on their screen images. Ex-Mouseketeer Annette Funicello became one of the first big female teen idols in this fashion, and Ed "Kookie" Byrnes, Connie Stevens, Johnny Crawford, James Darren, and Shelley Fabares also got onto the hit parade after they were already established TV performers. Artistically, this was the weakest wing of the teen idol genre; unsuited for singing in the first place, their material often sank to the level of drivel, with a few unexpected choice items thrown in, usually from Brill Building songwriters.

A great many teen idol singers had one or two big hits in this era without establishing a long recording career. Mark Dinning (Teen Angel) and Ray Peterson (Tell Laura I Love Her) capitalized on the short-lived vogue for teen death melodrama; Troy Shondell, Johnny Tillotson, Brian Hyland, and even a young Tony Orlando were merely some of the more successful of the
legions of young faces who were packaged for the young, middle-class, white, predominantly teenage audience in this era.

Then there were the singers who happened to be packaged as teen idols, but who were probably good enough to have succeeded anyway. Dion, Gene Pitney, and Del Shannon, as well as Ricky Nelson, all fall in this category; their music sometimes contained the melodramatic hallmarks of the teen idol style, but they were genuine pop/rock innovators each and every one, and have too often been dismissed as superfluous by listeners more concerned with these performers' images than their actual accomplishments.

And there were also teen idols whose music was obviously a watered-down version of early rock & roll forms. Bobby Vee was a transparent Buddy Holly clone, though much softer; Ral Donner was the most accurate Elvis Presley soundalike, though he took after Elvis's pop/rock ballads rather than the King's rockers; and Johnny Burnette had a brief career as a mainstream teen idol after moderate success as one of the best early rockabilly singers. Finally, there was an entire wing of British teen idols, although they had virtually no success in the States. Cliff Richard was by far the biggest, followed by a stable of singers with unlikely movie-star names, most managed by British impresario Larry Parnes. Billy Fury was the best of them; Adam Faith, John Leyton, Heinz, Helen Shapiro, and others were also big in their homeland before they largely sank into irrelevance after the rise of the Beatles in 1963 by......... Richie Unterberger

Many teen idols of the 1950’s weren’t that much different than the ones today. Popular singers like Frankie Avalon made millions and were able to afford things like fast cars, luxury motor yachts, and mansions.