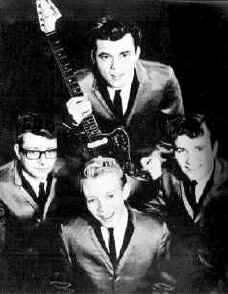 A Minneapolis rock & roll band, they evolved from Jim Thaxter & the Travelers, recording one single under that name ("Sally Jo"/"Cyclone"). The group comprises Tony Andreason (lead guitar), Dan Winslow (guitar/ vocals), Bob Reed (bass), and Steve Wahrer (drums/vocals). Unfairly depicted as a novelty act, the Trashmen were in actuality a

rhythm to the mix, and, by early 1964, the group was in the Top Ten nationwide with "Surfin' Bird." Though the group continued to release great follow-up singles and an excellent album, their moment in the sun had come and gone; they disbanded by late 1967/early 1968. They re-formed in the mid-'80s and continued to play locally until Wahrer's death. The Trashmen are revered by '60s collectors as one of the great American teen-band combos of all time, their lone hit exemplifying wild, unabashed rock & roll at its most demented, bare-bones-basic, lone-E-chord finest. -- Cub Koda, All-Music Guide