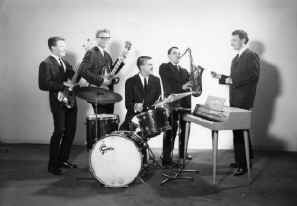 The historical importance of the Wailers is undeniable. They were one of the very first, if not the first, of the American garage bands.The very beginnings of Seattle's grunge rock sound  can be directly traced back to the pioneering efforts this of the rock 'n' roll combo.The Wailers are probably directly responsible for the sixties rock explosion in the Northwest. Paul Revere and the Raiders aspired to be as big as the Wailers were; the Kingsmen had a hit with their arrangement of "Louie Louie; the Sonics were groomed by the Wailers and the list goes on and on.

The fifties in the Northwest were an interesting melting pot. Clubs such as The Black

and Tan, Birdland, and the Evergreen Ballroom routinely brought black R&B acts to town, and Ray Charles was based in the area. Rockabilly had made its presence known, and Elvis

Presley was huge. It was out of this environment that five teenagers from Tacoma, Washington formed the Wailers.

Originally an instrumental band the Wailers had a national hit with "Tall Cool One" (#36, June 1959) while still in high school. They then went to the East Coast for some appearances, including the Alan Freed Show and American

Unhappy with the  way they were being  handled they returned to Tacoma and formed their own label Etiquette Records. Thus their material was self recorded and self promoted. The Wailers also produced a number of other acts, and Etiquette has left a fine history of some of the Northwest's most gritty recordings.

The Wailers had several fine vocalists in Rockin' Robin Roberts and Gail Harris who was only 13 years old when she first sang with the Wailers, and eventually became a regular during the early sixties. With Harris and Roberts the Wailers started moving in a far more R&B

direction. With  Robin Roberts doing the vocals, the Wailers turned an obscure R&B song "Louie Louie" into a 1961 local hit  that served as the prototype for

the countless subsequent versions of the 60s most popular garage song.

The live album The Wailers At the Castle was the first record featuring The Wailers, Gail Harris and Rockin' Robin Roberts all together. They often toured and recorded with female back-up singers the Marshans, thus emulating and updating the R&B revue/extravaganzas that had been so influential years earlier. Songs such as "Hang Up" and "Out of Our Tree" showed their abilities with mid-sixties "punk rock", but they were certainly as talented in any other musical sub-genre of that magical decade.

It was their hard-nosed R&B/rock fusion that inspired the Sonics and Kingsmen. Though the Wailers anticipated the British Invasion bands with their brash, self-contained sound, their inability to write first-rate original material, as well as their rather outdated sax and organ

driven frat rock,  that led to their decline in popularity. As the decade progress they did adsorb mild folk-rock and psychedelic music without much success.

Beginning in the late seventies and through the 80's The Wailers joined together for a number of successful reunion concerts. Today a new wave of interest and fans all over the world have enticed the Wailers to once again pick up their instruments and play their rock 'n' roll.

- Neil Skok (excerpts from an article by Neil Skok -1993, photos by Jini Dellaccio)