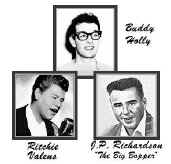 The lyrics to the song are left justified with comments indented. I have attempted to note where the interpretation is questionable (in red) so feel free to drop me a line if you have any answers

Was American Pie name of  the plane in which Buddy Holly died?

The entire song is a tribute to Buddy Holly and a commentary on how rock and roll changed in the years since his death. McLean seems to be lamenting the lack of "danceable" music in rock and roll and (in part) attributing that lack to the absence of Buddy Holly et. al.

I can still remember how That music used to make me smile. And I knew if I had my chance, That I could make those people dance, And maybe they'd be happy for a while.

But February made me shiver,

With every paper I'd deliver,

Bad news on the doorstep... I couldn't take one more step. I can't remember if I cried When I read about his widowed bride

But something touched me deep inside, The day the music died.

(Verse 2) Did you write the book of love,

And do you have faith in God above, If the Bible tells you so?

Now do you believe in rock 'n roll?

Can music save your mortal soul? And can you teach me how to dance real slow?

You both kicked off your shoes

But I knew that I was out of luck The day the music died I started singing...

(Verse 3) Now for ten years we've been on our own

And moss grows fat on a rolling stone

In a coat he borrowed from James Dean

And a voice that came from you and me

Oh, and while the King was looking down The jester stole his thorny crown

The courtroom was adjourned, No verdict was returned.

but its more likely to be...