The originals were always better than the covers, but were almost always outsold by them.

Covering a song in the recording industry was nothing new. There had always been different versions of popular songs such as "White Christmas." Bing Crosby's version is the one most are familiar with, but many artists that recorded "White Christmas," among them the Drifters in 1954. ASCAP had even looked at favorably as more airplay would allow the collection of more royalties What was different now was the the purpose of the covers. To fully understand what was happening one needs to know a bit of the recording industry's history.

After the depression major companies decided to abandon the "race" record market which  they deemed no longer profitable. The void was quickly filled by a number of  small independent companies made up of men who knew and love black music.

At about the same time BMI was formed as alternative to the major's licensing arm ASCAP.  The radio industry had grown tired of paying high royalties for songs licensed by ASCAP, which most of the "pop" songs were. The haughty ASCAP chose not to licensee country and rhythm and blues songs. BMI began licensing rhythm and blues and country songs, that ASCAP had chosen to ignore.  When country and  rhythm and blues became rock and roll ASCAP  found itself out in the cold. ASCAP would be a prime mover behind the Senate Hearings on payola in the late fifties. 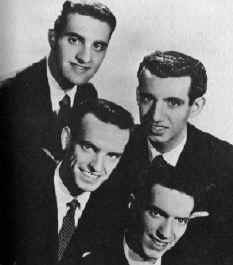 Clockwise from the top: Rudi, Maugeri, Pat Barrett, Ray Perkins, John Perkins
The Crew Cuts were the king of the cover groups

The original were always better than the covers, but were almost always outsold by them.

By the mid fifties the independents were dominating the rhythm and blues and the pop charts. The major companies counterattack by covering of their records.

Covering popular songs was a common industry practice. Publishers encouraged its greater exposures and sales boosted royalties. With coming of rock covers took on a racial overtone. The major record companies believed, despite the popularity with young white audiences, that commercial potential was stifled by rough production values and lyrics that marked many rhythm and blues records. So they would redo the songs with artists arrangements more acceptable for the mainstream pop audiences

Since the cover versions generally enjoyed superior promotion and distribution, they easily passed the originals on the charts and became bigger hits. limited money often made it impossible for the small independents compete nationally.  even when an original took off, the small label's inability to press enough copies or ensure their timely arrival stores handicapped their ability to be competitive.

By the mid fifties the independents were dominating the R&B and the pop charts. The Majors counterattack by covering of their records.

Early covers were substantially reshaped songs to make them appealing to different markets. By 1955 this began to change when Gibbs covered Lavern Baker's Tweedle Dee. No attempt to differentiate, same arrangement, same vocal style. This was partly because Atlantic had already polished it up for the pop market hoping it would preclude the threat   Mercury hired same arrangers and musicians. With superior distribution other artist followed most common victims black at first, a competitive edge due to the above and favoritism disc jockeys showed for white copies of r&b. 1956 teens demand authenticity

The cover record was meant to appeal to largest market possible This was done by retaining the same melody, tempo, chords and with enough emotion and feel and cleaning up of the lyrics if necessary, the record would appeal to both adults and teenagers. With generally enjoyed superior promotion and distribution covers overtook and became bigger hits. Limited capital often made it impossible for independents to compete. Even when they took off the smaller labels inability to press enough copies or ensure timely delivery hampered their sucess reason.

Despite few attempts to develop new artist to appeal to the youth, the major companies opted to cover records, seeing it as  fastest and easiest way to garner the huge profits generate by the rock and roll.

The at their worse, covers were the outright theft  with whole arrangements taken from the black records they covered.

1954 became the year of "The Cover." The Major companies would choose  a suitable song such as "Sincerely, " "Earth Angel," Sh'Boom," etc. Then they hire a white group to record a cover. With their greater resources they could be competing in a week or two. In most cases the covers sound quality was superior, which gave them an advantage in the market place. In 1955, former Big Band singer Georgia Gibbs hit it big with two covers. Her cover of Lavern Baker's "Tweedle Dee made it to #4 Pop while hers of Etta James's "The Wallfower" was even bigger reaching the #1 spot.

"Imitation might be the sincerest form of flattery but, that kind of flattery I can so without"
Lavern Baker

By 1955 this began to change when Gibbs covered Lavern Baker's Tweedle Dee, no attempt was made to differentiate between the two. Mercury used the same arrangement same vocal style  This was partly because Atlantic had already polished it up for the pop market hoping it would preclude the threat of a cover version..   Mercury used the same arrangers and musicians with superior distribution outsold Baker's version. Other artists soon began following the same formula..The most common victims at first were black artist, a competitive edge due to the above and favoritism disc jockeys showed for white copies of rhythm and blues  By 1956 this would changes as teens began demanding authenticity.

Lavern Baker begins a tour to start in Australia. She takes out a $125,00 life insurance policy naming Georgia Gibbs as sole beneficiary. In a letter to Gibbs Baker writes that the policy is is to provide for her should she be deprived in the event of my untimely death "of the opportunity of copying my songs and arrangements in the future" The letter closed.
Tra La La and Tweedle Dee,
LaVern Baker.

Most of the other covers of 1955 were just as bad if not worse - pop singer Perry Como and a smash hit with Gene and Eunice's R&B record "Ko Ko, Mo," while Pat Boone had tremendous success with R&B songs "Two Heart," "Ain't That a Shame," and "Tutti Fruitti."

Besides the original label and artist the publisher was hurt, too.  Copyright royalties were based on records sold. The covering company generally gave twenty five percent of the "covers" away.  With more of the records in circulation fewer of the original were sold.

Recognizing this Syd Nathan and Herman Lubinsky head of Savoy Records in 1955 refused to license their songs to other companies. This forced other companies to file "Notice of User" application with the copyright office before releasing their version. This legally obligated them to pay royalties on the number of records manufactured rather then sold and required them to pay royalties every 30 days rather then quarterly, which was industry practice.

The difference between a re-make and a cover