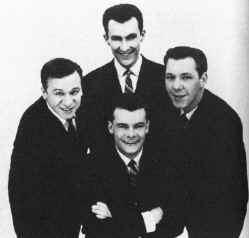 The Diamonds were a clean-cut white vocal group that had sixteen hits between 1956 and 1961, ten which were covers of songs sung by black R&B artists
.

The original group consisted of Dave Somerville, Phil Levitt, Ted Kowalski, and Bill Reed. When Kowalski and Reed left they were replaced by Californians John Felton and Evan Fischer.

In the beginning the group practiced several types of vocal styles, including four part "barber style" harmony. The Diamonds  began their singing in local clubs, school functions, church socials, and anywhere they could find an audience.

They came to the attention of Coral Records, a subsidiary of Decca Records, where they covered two records, Black Denim Trousers and Motorcycle  Boots ( a hit for the Cheers) b\w "Nip Sip" (a Clovers song) during the summer of 1955. Neither sold well enough to convince Coral to retain them.  However, Bill Randle, an influential Cleveland deejay, liked them enough to mention their name to an executive at Mercury Records. the Diamonds signed with one of the labels that developed the market for "covers."

The Diamonds decision to cover rhythm and blues artist was the result of economic reality: cover records sold very well in markets where the original versions wouldn't be acceptable. Among their hits in 1956 were "Why Do Fools Fall In Love," "Church Bells May Ring," "Love, Love, Love" and "Ka-King-Dong," originally recorded by the Teenagers, the Willows, the Clovers, and the G-Clefs, respectively.

Their biggest hit was a cover of the Gladiola's "Little Darlin'." The Gladiolas version came out in the first week in February, 1957. In less then two weeks the Diamonds version was out. Legend has it that prior to the recording session the group rehearsed the song all night in their hotel room, becoming so fed up that they exaggerated the bass and falsetto parts in an attempt to turn the song into a satire of itself. This is only partly true. Maurice Williams, the Gladiola's lead singer, invented all the vocal trills and hiccups.. However, the spoken bridge was not performed by the Gladiolas.The Diamonds continued covering other artists  and their version of "Words of Love"  brought the song's writer Buddy Holly his first significant royalties. By late 1957, the music industry began to accept as true that what had been known by teenagers for two years: original rock and roll couldn't be copied just by anyone. Rock and Roll was a form of expression that relied as much on delivery as on lyrics and musical notation. Rock and Roll singers learned this lesson for themselves as they many switched from small companies to major labels. Often their first session's attempted to record their earlier hits by copying the original style.

Seeing the future the Diamonds sought an original song to record. In the late spring of 1957, Chuck Willis' "C.C. Ryder" became the first of a string of rhythm and blues songs based on a dance named the Stroll. Clyde Otis, a songwriter who had with Nancy Lee written a song based on the new dance, approached the Diamonds. "The Stroll" became a huge hit partly as a result as a result of repeated airings on American Bandstand. "The Stroll" was perfect for television because it was exuberant and photogenic.

The groups popularity waned after "The Stroll." By 1959, after "She Say (Oom Dooby Doom), the group's popularity was over as they no longer appealed to the teenagers. During the next two years  the Diamonds became a popular attraction on the dinner club circuit in Las Vegas, New York, and Chicago. They had a minor hit in 1961 with a version of the Danleers 1958 hit, "One Summer Night." Soon thereafter, the group disbanded.

The group stayed in touch and in 1973, the group reunited on a television special saluting the pioneers of rock and roll.. This led to sporadic nightclub and casino bookings. In May 1982, while playing The Nugget Casino in Sparks, NV, John Fenton was killed in a private plane crash. In 1989, the Diamonds reformed to join a rock and roll tour with Dion and the Belmonts, The Flamingos and The Silhouettes.

The Diamonds took their share of blame heaped on white artist of the 50s that made their living  the records of black singers. The group only did what they felt was necessary to succeed in a tough business. they didn't invent the cover and didn't record as many covers as many other "pop" artist that found greater success.

If cover records were a scandal, the roots of the practice laid in the disparity of the races that was an everyday part of life in many parts of the US at that time. segregation had existed in the record industry since its beginning. By the 1950s "race" records was a forbidden fruit to many white teenagers, especially where there was no Negro presence or it was repressed. Only the original fruit, not an imitation, could satisfy that craving. that is why teenagers across the South listened in the middle of the night to WLAC from Nashville. This was true in Texas, Where Wolfman Jack broadcast from Del Rio. In :Los Angeles, it was Art Laboe on XPRS with its transmitter located in Tijuana. Rock and Roll not only survived cover records, but became a stronger music form.

In 1987 the Diamonds released  Diamonds Are Forever an album aimed at the Country market. Two singles, "Just a Little Bit" and "Two Kinds Of Women" did well enough to be listed on various country charts. Original members retired for various reasons and by the 1990s the group consisted of Gary Owens, a member since 1975, Bob Duncan, with the group since 1989; Jerry Siggins, who joined in 1991; and Bill New, who joined in 1993. The Diamonds remain a popular draw in casino lounges and nightclubs.