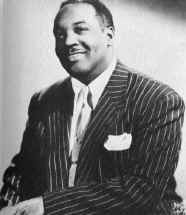 To many fans of rock and roll Bill Doggett's claim to fame rests solely on the instrumental riff that is the very backbone of "Honky Tonk."

In 1956, as teenagers scrambled to purchase the years hottest instrumental few realized that Doggett's contribution within the framework of the recording was obscured by the guitar and saxophone. Doggett didn't even play the bass or drums, that can be clearly heard by  the discerning ear. Doggett played the Hammond organ.

In a field dominated by performers around twenty, Doggett was almost twice that when he and his combo came up with the tune he is remembered for "Honky Tonk."

William Ballard Doggett was born February 16, 1916, on the north side of Philadelphia. At age nine, Doggett was attracted to the trumpet, but his family could not afford one.  Bill's mother, Wynona, was a church pianist and his inspiration. Within a few years, he switched to the piano and was hailed as a child prodigy by the time he was thirteen. At fifteen, he formed his first combo, the Five Majors. While attending Central High School, he found work playing in the pit orchestra at the Nixon Grand theater with the Jimmy Gorman Band.

Eventually, he inherited Gorman's fifteen-piece orchestra. His career as a band leader was short-lived as he came to the conclusion that the field was over crowded. In financial distress , he sold the band to Lucky Millender and joined Millender himself.   In 1939, Doggett with Jimmy Munder, Benny Goodman's arranger, form an orchestra. Later that year Doggett made his first two recordings as part of Lucky's band, "Little Old Lady From Baltimore" and "All Aboard," released on the Varsity label.

Doggett returned to Millender's orchestra as a pianist in 1941. He appeared on the next eight of Millender's recordings. In late 1942, he joined the Ink Spots and became the group's arranger and pianist.  He stayed with the group two years during which he recorded five singles with them.

The next ten years, Doggett toured and recorded with several of the nation's top singer and bands, including Johnny Otis, Wynonie Harris, Louis Jordan, Ella Fitzgerald and Lionel Hampton.

In 1949 he joined Louis Jordan, as a pianist replacing Wild Bill Davis. Doggett was a featured performer on many of Jordan's classic Decca recordings including "Saturday Night Fish Fry' and "Blue Light Boogie." Doggett credited his time with Jordan for educating him to the finer points of pleasing an audience.

When Doggett decided to form another combo he was torn with should he use the organ in a "pop" music setting.  Like most musicians of that time, Doggett felt the sound of the organ was sacred and should be reserved for a church setting. However, when on he own he decided that he needed a fresh sound to set him apart from other piano combos. It was an agonizing design, but he felt it was the right one in switching to the organ. In late 1951 he formed a trio and quickly landed a recording contract with Cincinnati's King Records.

While with King 1952-56, more than a dozen singles were released. Many were moderately successful within the rhythm and blues community and some even caught on with the jazz fans.  Most of the records were delivered in the mildly swinging groove reflecting his years with Millender and Jordan. He also recorded in the slow blues style perfected during his years with Fitzgerald and the Ink Spots.

"Honky Tonk" came together in February 1956 during the many one-night stands the group played coast to coast. At first hearing there was nothing fancy about it. However, Doggett knew he had a potential dance hit as night after night he received positive response from the crowd. June 16, 1956, "Honky Tonk" was recorded for King Records in its New York Studio.

The success of "Honky Tonk"  was a two edged sword. The group received offers for numerous bookings, but most were to appear in rock and roll settings and none of the group considered themselves to be rock and roll.

Follow up records were more on the rhythm side of rhythm and blues. "Slow Walk" rivaled Sil Austin's original version, "Leaps and Bounds," an original tune and a driving piece of music, received a lighter jazz feeling.

In 1957 Doggett went bank to his roots for "Ram-Bunk-Shush," a tune that had been a hit for Millender. Doggett's version of Tiny Bradshaw's "Soft" provided as close change-of -pace as one can find during Doggett's recordings of this period.

Doggett remained with King Records until 1960. The next few years he recorded for Warner Brothers.  After that Columbia, ABC-Paramount and Sue for sporadic singles and albums. His strong drawing power allowed him to work jazz festivals in America and Europe. By the mid sixties rock and roll had changed forms and left him behind.  At the same time his popularity in the jazz community had declined. Finding it hard to get regular bookings, he turned his efforts toward the passage of civil  rights passage using his concerts to promote public awareness.

By the 1970s, Doggett had reestablished himself in the jazz community and regular offers of bookings started to come in. He played regional jazz clubs in New Orleans, Cleveland and New York State.

Doggett has always pointed to Wild Bill Davis as his inspiration as before Davis vitally no other performer had used the organ in a jazz setting.

Today Bill Doggett is semi-retired at his home in Islip, Long Island. He still performs occasionally in America and Europe.