Howard Greenfield was an American lyricist and songwriter, who for several years in the 1960s worked out of the famous Brill Building. He is best known for his successful songwriting collaborations, including one with Neil Sedaka from the late 1950s to the mid-1970s, and a near-simultaneous (and equally successful) songwriting partnership with Jack Keller throughout most of the 1960s.

On November 11, 1952, at the urging of mother Ella, Greenfield rang Sedaka's doorbell. It was then he proposed that Sedaka compose music to a set of lyrics he had written. Sedaka composed his first melody, My Life's Devotion, set to Greenfield's lyrics. Soon they were writing a song a day.

Greenfield idolized Lorenz Hart, Richard Roger's lyricist. Hart was a homosexual, just as Greenfield in his teens may not yet have recognized yet that he too was gay.

In 1954, while at Andria's Pizzeria with Sedaka, Earth Angel was  playing on the jukebox. Quite different than the classical, Broadway musicals and Tin Pan Alley tunes Sedaka was comfortable with, Earth Angel excited him. Greenfield dismissed it as disgusting and off key. Sedaka persisted and the two wrote Mr. Moon. Sedaka performed with a saxophone player and drummer at his Abraham Lincoln High School assembly. When the students heard they it all got up a danced. The uproar so disturbed the school's principal that Sedaka was ordered not to play it at the second assembly.

While doing clerical work at Famous Music, Greenfield befriended a songwriting secretary at the Brill Building. A recommendation from her led to Greenfield and Sedaka to Atlantic Records where Jerry Wexler bought several of their songs for the Cookies. 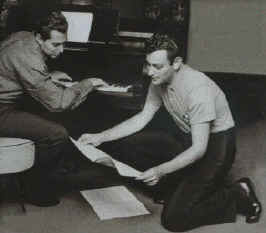 Their first recorded compositions took up both sides of the 1956 non-charting debut single by the Tokens, of which Sedaka (but not Greenfield) was briefly a member. They then went on to supply the song "Passing Time" to the Cookies, as well as other non-hit singles to doo-wop and groups the Clovers and the Cardinals. At this point, though their songs were being recorded, the income derived from these songs was minimal, and Greenfield worked as a messenger for
National Cash Register.

In the spring of 1958, Greenfield and Sedaka signed to Al Nevins and Don Kirshner's Aldon Music as songwriters, which had offices at 1650 Broadway in New York. (The company later moved to the Brill Building.) In their first year there, Greenfield and Sedaka wrote material for Jimmy Clanton and Bobby Darin, and scored their first major pop hit single with Connie Francis' "Stupid Cupid", which hit #14 on the US pop charts in September 1958. They would also write Francis' later hits "Fallin'", "Frankie" and the "Theme to Where the Boys Are," the film in which she starred.

In 1958, Sedaka signed to RCA Records as a solo artist, he and Greenfield composed a string of hits for Sedaka to record – among them "The Diary", "Oh! Carol", "Stairway to Heaven", "Calendar Girl", "Little Devil", "Happy Birthday Sweet Sixteen", "Next Door to an Angel" and the chart-topping "Breaking Up Is Hard to Do". Sedaka's recordings eventually sold a combined 25 million records.

As Sedaka's promotional and touring commitments began taking up more and more of his time, Kirshner encouraged Greenfield to collaborate with other Aldon writers. Beginning in 1960, Greenfield began a regular collaboration with Jack Keller; they would write songs together every Monday and Wednesday for six straight years. Successful Greenfield/Keller collaborations included two consecutive US #1 hits for Connie Francis, "Everybody's Somebody's Fool" and "My
Heart Has a Mind of Its Own". They also wrote another Francis top 10 hit, "Breakin' in a Brand New Broken Heart", Jimmy Clanton's top 10 hit "Venus in Blue Jeans", as well as songs recorded by Frank Sinatra, Ernest Tubb, Patti Page and Brenda Lee. In addition, Greenfield and Keller supplied the theme music for U.S. television programs such as Gidget, Bewitched and The Flying Nun.

Greenfield's one and only collaboration with Aldon songwriter Carole King resulted in "Crying in the Rain", a top ten hit for the Everly Brothers in 1962. The collaboration came about when, on a whim, two Aldon songwriting partnerships decided to switch partners for a day—Gerry Goffin (who normally worked with King) partnered with Jack Keller, leaving King and Greenfield to work as a pair for the day. Despite the commercial success of their collaboration, King and
Greenfield never wrote another song together.

In 1962, Greenfield found a partner to share his life with, cabaret singer Tory Damon. Together they moved into an apartment on East 63rd Street in Manhattan before moving to Los Angeles in 1966. Greenfield  still continued to write with Sedaka and Keller, both of whom moved to California within a year or two of Greenfield. 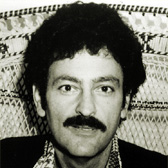 Sedaka and Greenfield also continued to work together as Sedaka's schedule allowed. After Sedaka's singing career cooled in 1963, they kept writing hits for other artists, including the 5th Dimension's and Tom Jones' "Puppet Man".

Greenfield also collaborated with other Aldon songwriters, including Helen Miller, with whom he co-wrote "Foolish Little Girl" (the Shirelles' final Top Ten hit), "It Hurts to Be in Love", originally intended for Neil Sedaka but ultimately recorded by Gene Pitney, as well as a new theme for the TV series Hazel for its fourth season. He also collaborated with Bill Buchanan recording a novelty record called "The Invasion" as Buchanan and Greenfield in 1964.

Sedaka began working with other lyricists in 1970, though he and Greenfield still occasionally worked together after this time; Sedaka and Greenfield ended their songwriting partnership in 1973. Their last collaboration, appropriately named "Our Last Song Together," would be a minor hit for Bo Donaldson and The Heywoods. In 1975, their song "Love Will Keep Us Together" (originally recorded by Sedaka in 1973) topped the Billboard Hot 100 chart in a cover version by Captain & Tennille, as well as earning a Grammy Award for Record of the Year. This version of "Love..." was the best-selling single of the year.

Greenfield co-wrote four songs that reached #1 on the US Billboard charts: "Breaking Up Is Hard to Do", as recorded by Sedaka; "Everybody's Somebody's Fool" and "Breakin' in a Brand New Broken Heart", both as recorded by Connie Francis, and "Love Will Keep Us Together", as recorded by Captain & Tennille. He also co-wrote numerous other top 10 hits for Sedaka (including "Oh! Carol", "Stairway to Heaven", "Calendar Girl", "Little Devil", "Happy Birthday Sweet Sixteen", and "Next Door to an Angel"); Francis (including the "Theme to Where The Boys Are" and "My Heart Has a Mind of Its Own"); the Everly Brothers ("Crying in the Rain"); Jimmy Clanton ("Venus in Blue Jeans") and the Shirelles ("Foolish Little Girl"). Greenfield also co-wrote the theme songs to numerous 1960s TV series, including Gidget, Bewitched, The Flying Nun and Hazel.

In 2005, "Is This The Way To Amarillo", a song Greenfield had written with Sedaka in the early 1970s, reached #1 on the UK charts in the original 1971 version by Tony Christie. The video featured an all-star celebrity line-up lip-synching the track, and the proceeds went to charity. The record stayed at #1 for 7 weeks, and became the UK's best-selling record of the millennium to that time.

Greenfield died in Los Angeles in 1986 from complications from AIDS, eleven days before his 50th birthday. He was interred at Forest Lawn Memorial Park. Damon died from AIDS complications just a few days later and is buried next to Greenfield

In 1991, Greenfield was inducted into the Songwriters Hall of Fame.