Jay and The Americans 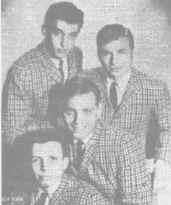 One of the most popular groups of the '60s, Jay and the Americans brought a distinctive sound
and clean cut image to the music scene.

Six high school classmates from the Belle Harbor neighborhood on Long Island formed the Harbor Lites, named after their neighborhood, in 1959. Among the six were Kenny Vance (nee Rosenberg, December 9, 1943), Sandy Yaguda (born January 30, 1943) and Sydell Sherman. Also living in the neighborhood was Irving Feldman, owner of Ivy Records. They sought out Feldman for an audition, but were turned away after being told they needed more practice. At that time the other three members left. After a few months of practice, they auditioned for Feldman again and were signed. In April 1960, their first single "Is it To Much To Ask" was released. It might have come out on Ivy, but was soon purchased by Jaro a small label run by the J. Arthur Rank Organization, a huge British entertainment complex. With help from New York deejay Cousin Brucie it became a minor hit locally. Rank soon closed Jaro to concentrate on releases by its Top Rank subsidiary and the Harbor Lites were dropped. In 1960, the groups other single "Tick-a Tick-a Toc," which may have been released briefly by Jaro, came out on Mala label, a struggling, medium size New York company.

Jay Traynor picked up a manager in Jim Gribble. Gribble had handled several groups in the area, including the Classics, the Fiestas, the Passions, a young Paul Simon as well as the Mystics.. The Mystics had a big hit with "Hushabye" in the summer of 1959. Their lead singer, Phil Cracolici, was forced to drop out and Jay Traynor was brought in. Traynor was born March 30, 1943 was from Brooklyn then Upstate New York where he attended Greenville Central High. He and his mother moved to Minleola on Long Island in 1959. He joined with some guys from Queens to form the Ab-Tones. The Traynors moved to the Baybridge section of Brooklyn after being introduced to Jim Gribble. At a Clay Cole Record hop, Traynor met Vance. and Yaguda in Gribble's office and the three decided to form their own group. An old friend from Flatbush, Howard Kane (nee Kirschenbaum) was added.

In 1960, the group auditioned for Terry Phillips, a Belle Harbor songwriter and producer for Golden Records. With his connections, Phillips got them an audition with Jerry Leiber and Mike Stoller. Leiber and Stoller decided to sign the group, had second thoughts and didn't. Upon learning that the group wasn't being signed Vance's mother ordered her son to go back, give Leiber and Stoller a piece of his mind and tell them they must live up to their agreement. Shocked, but pleasantly surprised they signed the boys to a contract.

Leiber and Stoller built on the group's natural doo wop ability attempted to broaden their appeal by emphasizing Traynor's lead and the pop flavor of the sound. United Artists decided to rename the group Binky Jones and the Americans. A compromise changed it to Jay and the Americans.

The big movie at the time was Westside Story, in which United Artists had a stake. The record division needed some artists to record songs from the film and Jay and the Americans were given "Tonight." In the late summer of 1961, the group cut "Tonight" at its first United Artist recording session. At the same time two other U.A. acts, Ralph Marterie and Ferante and Teicher, also recorded "Tonight."  Though most of the promotion money was spent on the two better known acts, the single sold 40,00 copies in the New York area. 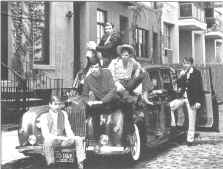 The second single "She Cried" headed straight up the charts and reached #5 in the spring and early summer of 1962. The next single "This Is It" charted but was not the hit that everyone expected. At this time Traynor decided to leave to pursue a solo career that began in 1963 with Coral Records. His first single "How Sweet It Is" was a minor hit in Japan. His last last single "The Merry Go Round Is Slowing Down" recorded three years later for ABC-Paramount Records was a Northern Soul hit in the UK.

Meanwhile, David Blatt (who called himself David Black, born November 2, 1938) and Marty Sanders (Born February 28, 1941) were also trying to record on the Ivy label. They recorded :Forgive Me" on the Atlantic label as the Two Chaps. Then in the spring of 1962, they sang with the Empires from Tilden High in Brooklyn, on the Epic label release of "Time and a Place." Marty was also playing guitar for Jay and the American sessions. While working on their album he asked to become a member.

Meanwhile the Americans were without a lead single. Marty Sander, the group's backup vocalist since "She Cried " sessions brought in his friend David Blatt (born 28, 1941) to audition. Blatt was the lead singer for the Empires, an all Jewish vocal group from Tilden High School in Brooklyn. Blatt won the spot. Reluctant to change the group's name to David and the Americans, David Blatt became Jay Black. Other names changed as well: Kenny Rosenberg became Kenny Vance; Howard Kirshenbaum became Howie Kane.  With a new lead and three new names Jay and the Americans resumed its career. The next two singles, "Tomorrow" and "Strangers Tomorrow" failed to chart.

With the success of "She Cried," Jay and the Americans were booked on a continuous string of one nighter tours. The constant travel and failure of the next two singles caused Traynor to leave the group to go solo by mid-1963. The Americans without Traynor sang backup vocals on Bobby Goldsboro's "See the Funny Little Clown."

Early in 1963 The Drifters (produced by Leiber-Stoller since 1959) recorded a Mann/Weil composition called "Only In America." When Atlantic decided not to release it the vocals were erased and replaced by Jay and the Americans. "Only In America" was released in July, 1963 and became their first chart hit (#25) with Jay Black singing lead.

Leiber and Stoller's work with the Drifters and the Coasters caused them to turn over production of the group's material over to Artie Ripp of Kama Sutra Productions (Later to be Kama Sutra Records). One year and two singles later they had their biggest hit with "Come a Little Bit Closer" (#3).  This resulted in the going on the Beatles first American tour in 1964, that also included the Righteous Brothers.

"Let's Lock the Door (#11) and "Think of the Good Times" both charted in the summer of 1965. At this time they began the second phase of their career with "Cara Mia" (#4). Beginning with Cara Mia" the group began covering successful oldies. Their next release was "Some Enchanted Evening" (#13) followed by Neil Diamond's first songwriting success "Sunday and Me" (#18).

Ten singles released between 1966 and 1968 produced only one top 30 record a remake of Roy Orbison's "Crying" (#25). Going back to originals, the public wasn't buying Jay and the Americans without a familiar song. They went back to the oldies reworking the Drifters, "This Magic Moment," which became their biggest hit since "Cara Mia" charting higher #6 than the original Drifters record #16.

From 1968 through 1971 they charted with three more remakes, that included the Turbans' "When You Dance, the Mystics' " Hushabye," and the Ronettes' "Walking in the Rain" (#19). Their last chart record was "Was Capture the Moment" in the spring of 1970 and their last single was the Drifters "There Goes My Baby." Singles continued to be issued through 1971, when the group disbanded.

In the early '70s Jay and the Americans did the oldies shows, with Jay Black staying as lead into the '80s while other members dropped out. Two band members at the time, Walter Becker and Donald Fagen went on to form Steely Dan. Kenny Vance began recording with record producer Joel Dorn (Roberta Flack) and recorded "Looking For an Echo in 1975. Vance's backup group included Eddie Brigatti of the Rascals, David Brigatti of the Hi-Five, Pete Anders of the Trade Winds, and most of the Americans minus Jay.

More than any groups of the 60s, Jay and the Americans paid tribute to the 50s vocal sound, singing songs by The Harptones, The Passions, The Cleftones. The Platters, The Skyliners, and The Impressions. The sound of Jay and the Americans has been dubbed as professional pop and that is pretty accurate. Jay and the Americans were greatly influenced by Leiber and Stoller's work with the Drifters and Ben. E. King in the early to the mid-60s. Jay and the Americans was one of the few successful groups to spend their entire career with one record label: all of their thirty-two singles and LPs were with United Artists.