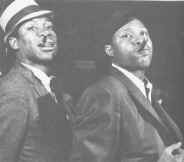 Sam Moore and Dave Prater, veterans of the gospel groups The Melionaires and The Sensational Hummingbirds, respectively  met at the King of Hearts club in Miami in 1961. They teamed up and recorded for Roulette Records in the early 60s with little success. Jerry Wexler signed them to Atlantic Records in 1965, with their singles and albums were issued on the Stax label. Recording at the Stax studio in Memphis, Tennessee under songwriter-producers Isaac Hayes and Dave Porter, who wrote virtually all their hits.. Usually recording with Hayes on the piano and backed by Booker T. and The MGs and The Memphis Horns, Sam and Dave had Top 10 R&B hit with "You Don't Know Like I Know in early 1966. "Hold On! I'm Comin'" a R&B hit and a Top 10 Pop hit, followed by R&B "I Said I Wasn't Gonna Tell Nobody," "You Got Me Hummin'," and "When Something Is Wrong With My Baby." They later had Top 10 Pop and R&B hits with "Soul Man" and "I Thank You."

In 1968 Sam and Dave's recording contract reverted to Atlantic when Stax was sold to Gulf-Western. The subsequent hits were largely R&B, most notably "You Don't Know What You Mean to Me" and "Soul Sister, Brown Sugar." Disbanding for solo careers in the late 1969, they reunited from 1972 to 1975, recording Back at 'Cha for United Artists. They separated again, but reunited after the success of  The Blues Brothers' late 1978 recording of "Soul Man" to tour through 1981. In 1986 Moore re-recorded "Soul Man" with Lou Reed for the film of the same name. Prater was killed in a car accident near Sycamore Georgia, on April 9, 1988. Moore appeared with Junior Walker in the 1988 film Tapeheads and enjoyed a renewed solo career in 1994 when his duet with Conway Twitty "Rainy Night In Georgia" appeared on the Top 10 crossover album Rhythm, Country, and Blues.