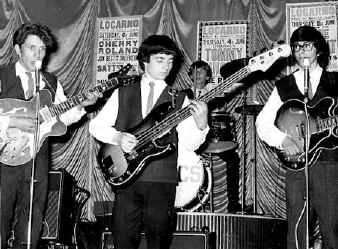 The Sonics whose name it is said was inspired by both the Boeing factories in and around Seattle and the jet like sound this fivesome produced. A premier garage band with hit after hit on the local charts, the band inexplicably was never able to break out nationally, leaving their sound largely undiluted for mass consumption.

They played classic songs by Little Richard and Chuck Berry, but wrote their own work too. It is by those songs that the Sonics have reached the legendary status they still have. The horror inspired texts, distorted and loud guitar playing and the hysterically screaming vocals make songs such as “(She's a)Witch”, “Boss Hoss”, “Cinderella”, “Psycho” and “Strychnine” true classics.

The Sonics from Tacoma, Washington were formed in 1963 in the wake of the early 60s success of local favorites the Kingsmen and the Wailers (whose Etiquette label they recorded for).  The original members were Gerry Roslie (lead singer and piano/organ), Andy Parypa (bass), Larry Parypa (guitar), Bob Bennett (drums), and Rob Lind (saxophone).

The Sonics combined the classic Northwest-area teen-band raunch with early English band grit (particularly influenced by the Kinks), relentless rhythmic drive, and unabashed '50s-style blues shouting for a combination that still makes their brand of rock and roll perhaps the raunchiest ever captured on wax.

Lead singer Gerry Roslie was no less than a White Little Richard, whose harrowing soul-screams were startling even to the Northwest teen audience, who liked their music powerful and driving with little regard to commercial subtleties.

The Sonics started out playing at St Mary's Parish Hall, then Tacoma's Red Carpet teen dance club, Olympia's Skateland, Evergreen Ballroom, Pearl's and the Spanish Castle Ballroom. It was the Wailers bassist, Buck Ormsby that discovered the band as he was out talent scouting for their label, Etiquette Records.

Unlike what was customary in those days the Sonics used to play as loud as possible. One of the semi-legendary stories going around about their recording sessions tells that the Sonics were only satisfied about the studio sound when all VU-meters were continuously in the red, thus driving the technicians to despair.

"The Witch" became a hit in November after the Sonics had performed at Tacoma's Curtis High School. Andy: "We had just played their homecoming dance

and Pat O'Day (the regions biggest DJ) came in the next week to do one of his sockhops and give a few records away. A bunch of kids kept requesting, The Witch so I guess he finally played it and the place went nuts. The next day Pat started playing (the record on the air). The single then became the all-time best-selling local rock single in Northwest history.

In fact this radio station (KJR) wouldn't air the tune prior to 3pm. Andy: "O'Day later told me that eventually the song had reached No 1 in sales, but the station policy said it was too far out to chart at No 1. The station only played it after kids got out of schools".

Their first album was a masterpiece: rough, aggressive, distorted with sweaty and frantic rock and roll. The songs "(She's a) Witch", "Psycho" and "Strychnine"

written by Gerry Roslie were outstanding. For those who are not familiar with the Sonics, the first lines of “Strychnine” give a nice impression of their world: “some people like water / some people like wine / but I like the taste ... / ... of straight Strychnine”

Their second album was not that frantic, but still fantastically good - (their "Louie Louie" is really the best version ever recorded!)  In 1966 they were the opening act for the Beach Boys, Jan & Dean, Jay & the Americans, Ray Stevens, Herman's Hermits, the Righteous Brothers, the Kinks, Lovin' Spoonful, Mamas & Papas and the Byrds. They also played together with another garage band, the Liverpool 5 and the female trio, Shangri-Las.

Their third album, which was produced by Jerry Dennon of Jerden Records, was called Introducing The Sonics because it was their first on a major label. This album was later re-released in the late seventies under the title The Sonics' Original Northwest Punk.

The last 45 recorded by the original line-up was "Any Way The Wind Blows." After this members departed to go to college or join other bands with Rob Lind being the last original member to leave in 1968. 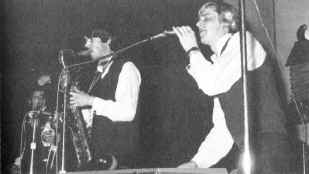 Breaking up in the late '60s, after  attempting to water down their style for national attention, the Sonics continue today to be revered by '60s collectors the world over for their unique brand of rock & roll raunch

Gerry Roslie, reformed the band in 1979 with a new line-up to record an LP called Cinderella for Bomp.

Even nowadays, more than 30 years later, the Sonics' music can make a crushing impression on someone who hasn't heard anything from them before.