In January of 1959 Buddy Holly, Dion and the Belmonts, Ritchie Valens, the Big Bopper and Frankie Sardo set out on a twenty-four day tour of the mid-western United States.  The tour for Holly, Richardson and Valens would end in disaster on February 3, 1959. All  three would die in their charter plane crash on the way to the tour's next stop. The Winter Dance Party  is characterized "As the Day the Music Died" in Don McLean's song "American Pie."

The tour was to kickoff on on January 23, 1959 at George Devine's Ballroom in Milwaukee, zig-zag throughout the upper Midwest and end February 15 at the Illinois State Armory in Springfield, Illinois

The tour was a disaster from the start, playing small dates in frozen towns, with all the musicians crammed into a drafty bus that would breakdown only to be replaced by a series of busses that were no better. One of which its heating system would breakdown leaving its occupants in weather that ranged from twenty degrees to thirty-six below without heat. 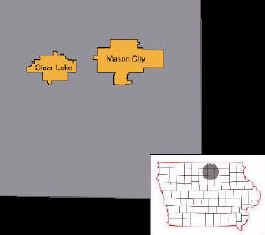 By February 1, Carl Bunch Holly's drummer had left with frost bitten feet and a mood of rebellion was overtaking the tour. The tour was scheduled to play two shows that day and and then to go to Clear Lake, Iowa for the next evening's performance. By the time they got there, everyone was in a bad mood. Holly told his band members, guitarist Tommy Allsup and bassist Waylon Jennings, that after the show he was going to lease a plane from Dwyer's Flying Service in Mason City, Iowa to fly them to Fargo, North Dakota, ahead of everyone. The rest of the party would have picked him up in Moorhead, saving him the journey in the bus and leaving him time to get some rest.

On Monday, February 2, the tour arrived in Clear Lake, Iowa. Not a scheduled stop, tour promoters, hoped to fill an open date, called the manager of the local Surf Ballroom, Carroll Anderson and offered him the show. He accepted, and they set the show for that night. By the time Holly arrived at the venue that evening, he was frustrated with the ongoing problems with the bus. The next scheduled location was Moorhead, Minnesota.

Holly decided to charter a plane to take his band and him to Fargo, North Dakota. The rest of the party would have picked him up in Moorhead, saving him the journey in the bus and leaving him time to get some rest. Surf Ballroom manager Carroll Anderson called Jerry Dwyer, owner of the Dwyer Flying Service, a company in Mason City, Iowa, to charter the plane to fly to Hector Airport in Fargo, the closest one to Moorhead. Flight arrangements were made with Roger Peterson, a 21-year-old local pilot. The weather was bad with flying advisories out, ones that any instrument trained pilot could handle, but the Peterson wasn't licensed for instrument flying, plus he had recently failed his instrument test. After Holly called his wife in New York they prepared to go the the airfield.

Dwyer charged a fee of $36 per passenger for the flight on the 1947 single-engined, three seater Beechcraft 35 Bonanza.

After the show ended, Anderson drove Holly, Valens, and Richardson to the Mason City Municipal Airport. The weather at the time of departure was reported as light snow, a ceiling of 3,000 feet . The sky was obscured, visibility 6 miles and winds from 20 to 30 mph  Although deteriorating weather was reported along the planned route, the weather briefings pilot Peterson received failed to relay the information.

There had been some changes made as to who was to fly. The Big Bopper, who was tired of wedging his oversized frame into tiny bus seats, asked Jennings to let him have his seat to which Jennings agreed. Valens asked Allsup for his seat. Allsup wasn't as agreeable as Jennings and they decide to flip a coin with the loser riding the bus. Allison lost.  Holly, Richardson, and Valens got into the plane and Peterson started the engine of the four place Beechcraft 35 Bonanza and took off.

By this time Dwyer was back and noticed  that the take off was shaky. A few minutes later he got on the radio to see if everything was alright. When there was no answer he called the Fargo airfield to see if the plane had landed. It hadn't. Worried he took off in another airplane to retrace his planned route and found the plane eight miles from Clear Lake, crashed in a cornfield, with bodies strewn all around. The sheriff's office, alerted by Dwyer, dispatched Deputy Bill McGill, who drove to the crash site, a cornfield belonging to Albert Juhl.

The Bonanza had impacted terrain at high speed, estimated to have been around 170 mph, banked steeply to the right and in a nose-down attitude. The right wing tip had struck the ground first, sending the aircraft cartwheeling across the frozen field before coming to rest against a wire fence at the edge of Juhl's property.

The bodies of Holly and Valens were found near the wreckage. Richardson's body had been thrown over the fence and into the cornfield of Juhl's neighbor Oscar Moffett, while pilot Peterson's body was entangled in the plane's wreckage. Carroll Anderson, who had driven the party to the airport and witnessed the plane's takeoff, had to identify the bodies of the musicians. County coroner Ralph Smiley certified that all four victims died instantly, citing the cause of death as "gross trauma to brain" for the three artists and "brain damage" for the pilot.

The crash site was not discovered until well after sunrise, when the owner of Dwyer Flying Service conducted a brief search, following Peterson's flight path. Because of the weather and remote location of the wreck, no ground team was able reach the crash site until later in the morning.

The official investigation was carried out by the Civil Aeronautics Board. Peterson had over four years of flying experience, of which one was with Dwyer Flying Service, and had accumulated 711 flying hours, of which 128 on Bonanzas. He had also logged 52 hours of instrument flying training, although had passed only his written examination, and was not yet qualified to operate in weather that required flying solely by reference to instruments. He was only certified to operate  under visual flight rules, which essentially require that the pilot must be able to see where he is going. On the night of the accident, visual flight would have been virtually impossible due to the low clouds, the lack of a visible horizon, and the absence of ground lights over the sparsely populated area.

The CAB concluded that the accident was due to "the pilot's unwise decision to embark on a flight" that required instrument flying skills he had not proved to have. A contributing factor was the pilot's unfamiliarity with the old-style attitude gyroscope fitted on board the aircraft, which may have caused him to believe that he was
climbing when he was in fact descending (an example of spatial disorientation). Another contributing factor was the "seriously inadequate" weather briefing provided to the pilot, which "failed to even mention adverse flying condition which should have been highlighted."